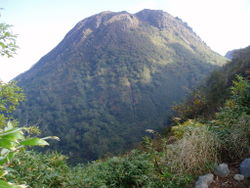 Mount Myoko (妙高山,   Myōkōsan) is a active stratovolcano in Honshu, Japan and is located at the southwest of Myōkō city, Niigata Prefecture, and a part of Joshinetsu Kogen National Park. It appears in the 2001 Godzilla film, Godzilla, Mothra and King Ghidorah: Giant Monsters All-Out Attack.

Baragon digging a tunnel through the hillside of Mt. Myoko in Godzilla, Mothra and King Ghidorah: Giant Monsters All-Out Attack

After a group of motorcyclists disturbed Baragon's shrine, Baragon awakened and caused an avalanche that buried the motorcyclists alive in a tunnel. The JSDF ordered a detachment of rescue workers to search for any survivors, utilizing the new Taiho missile carriers and firing D-03 Missiles into the rocks. A truck driver who had witnessed the incident insisted to the JSDF that the avalanche was caused by Godzilla.


↑ back to top ・ contents
Retrieved from "http://wikizilla.org/w/index.php?title=Mount_Myoko&oldid=155932"
Categories: