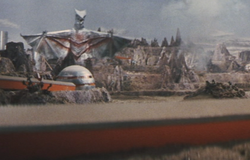 A Space Gyaos rampaging on Terra's surface in Gamera vs. Guiron

Terra (テラ,   Tera) is a rocky planet which first appeared in the 1969 Gamera film, Gamera vs. Guiron.

"Terra" is Latin for Earth.

After a spaceship transports the two Japanese kids, Akio and Tom, to the planet, they meet two of the planet's native aliens. The Aliens explain that Terra is on the opposite side of the Solar System to Earth, and that they are the last of their kind. They also reveal that the planet is being plagued by swarms of Space Gyaos, and send out Guiron to fight one. After Guiron kills the Gyaos, the true intentions of the Aliens are revealed - they desire to eat the kids' brains! Shortly afterwards, Gamera arrives to fight Guiron, and loses the first battle. As part of a plan to escape, Akio and Tom formulate a plan, and free Guiron from his lair underground. The kaiju goes berserk and attacks the Terrans' base, killing both the cannibalistic aliens. Gamera is successfully revived, and battles Guiron again, killing him, then taking the two kids home. It is assumed that after this, Terra became a home for the swarms of Space Gyaos.

↑ back to top ・ contents
Retrieved from "http://wikizilla.org/w/index.php?title=Terra&oldid=158347"
Categories: