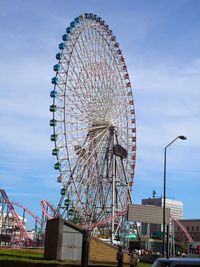 Cosmo Clock 21 during the day 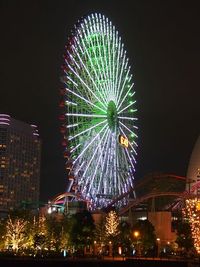 Cosmo Clock 21 (コスモクロック21,   Kosumo Kurokku 21) is a giant Ferris wheel that is part of the Cosmo World amusement park located in the Minato Mirai 21 district of Yokohama, Japan. It was the largest Ferris wheel in the world from its completion in 1989 until the construction of the Tempozan Ferris Wheel in Osaka in 1997. Shortly after this, the wheel was renovated and placed on a higher base, bringing it up to the same height as its successor. It's prominently featured in the climactic battle of the 1992 Godzilla film, Godzilla vs. Mothra.

Battra and Godzilla fight near the Cosmo Clock 21 in Godzilla vs. Mothra

During the final battle between Godzilla, Mothra, and Battra in the Minato Mirai 21 district of Yokohama, Godzilla used his nuclear pulse to knock Mothra into the Cosmo Clock 21, causing it to topple onto her. Before the giant Ferris wheel could crush Mothra, Battra flew overhead and grabbed it. He and Mothra then lifted the wheel into the air, and dropped it on Godzilla, trapping him in the mess of wires and metal, buying the two divine moths time to formulate a strategy for the battle that faced them.

During the battle between Godzilla, Mothra, and King Ghidorah in downtown Yokohama, the Cosmo Clock 21 could be seen in the background.

Cosmo Clock 21 in the Yokohama stage in Bandai Namco's Godzilla


↑ back to top ・ contents
Retrieved from "https://wikizilla.org/w/index.php?title=Cosmo_Clock_21&oldid=174353"
Categories: