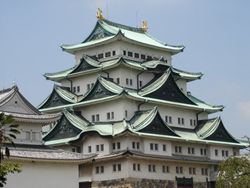 Nagoya Castle (名古屋城,   Nagoya-jō) is a castle in Nagoya, Japan. It was built in the early 1620s, and now belongs to the City of Nagoya. It first appeared in Mothra vs. Godzilla.

As Godzilla rampaged across the countryside, he encountered Nagoya Castle on the outskirts of the city. As Godzilla continued to advance, he suddenly tripped on the castle's moat, and fell onto the keep, breaking it into several pieces. 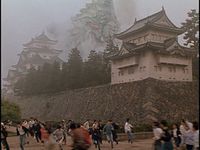 After rising from the sea in his larval form, Battra approached Nagoya Castle, towering over it. He quickly dealt with the building by blasting it several times with his horn, and what was left was quickly crushed under his body. The attacks dealt on Battra by the opposing MBAW-93s and Type 90 Tanks did little damage to him as he moved on into the city of Nagoya itself.

During his travel across Japan to reach SpaceGodzilla in Fukuoka, Godzilla passed through the city of Nagoya, walking by the now-rebuilt castle.


↑ back to top ・ contents
Retrieved from "https://wikizilla.org/w/index.php?title=Nagoya_Castle&oldid=181820"
Categories: