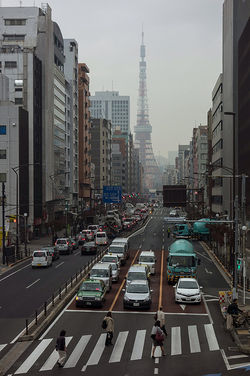 Tokyo Tower, seen from a busy street in Tokyo.

The Tokyo Tower (東京タワー,   Tōkyō Tawā) is a transmission tower in Tokyo that was completed in 1958. Ever since then, the tower has been one of the city's major landmarks. It is seen in many movies from the Godzilla and Gamera series, and also appears in many other films produced by a variety of companies. It usually bears the brunt of kaiju battles, and is usually reduced to a pile of rubble and bent steel at the conclusion of the battles.

Tokyo Tower is located in the Shiba-koen district of Minato, Tokyo, and is 333 meters tall. Like the Eiffel Tower, it has ample amounts of Radio apparatus and antennae which help supply television and radio signals to the city below. Until 2011, it was the tallest structure in Japan, with the title now going to the Tokyo Skytree, which is 634 meters tall. Tokyo Tower is still important, given its status as a transmitter and tourist attraction, but the Skytree was built to assist in its role, as tall buildings near the transmitters now interfere with Tokyo Tower's transmissions.

Mothra emerges from her cocoon on the Tokyo Tower in Mothra

After the larva form of Mothra emerges, having more than trashed the city of Tokyo, she topples most of the tower, then cocoons herself against the base. Later, she emerges from the egg and flies off to New Kirk City to retrieve her twin fairies.

During King Ghidorah's rampage in Tokyo, the Tokyo Tower can be seen destroyed after King Ghidorah flew through it, causing the tower to break in half and collapse into the houses below.

Gamera approaches the Tokyo Tower while destroying Tokyo in Gamera

As Gamera rampaged through Tokyo, he eventually came upon the Tokyo Tower and destroyed it before moving on.

King Kong and Mechani-Kong clamber up the outside of the tower to duke it out above the two observation decks, on the main radio antenna. Thanks to the timely intervention of Madame Piranha, who cuts off the control wires to a machine which allowed Dr. Who to control Mechani-kong, the robotic ape malfunctions, and falls off the tower, with his hand ripping off the tower's main antenna in the process.

Gigan hits the Tokyo Tower with his tail in Godzilla vs. Gigan

After the M Space Hunter Nebula Aliens deployed Gigan to Tokyo, he began attacking the city. He struck the Tokyo Tower with his tail a few times, eventually causing half the tower to break off.

Super Gyaos nests atop the Tokyo Tower in Gamera: Guardian of the Universe

After the main antenna of the tower is blasted off by the military due to a blunder, Super Gyaos builds a nest on top of the tower. When Gamera arrives, Super Gyaos roars at Gamera, and the giant turtle tries to blast Gyaos with a fireball, but destroys most of the tower's ruins.

During Godzilla's fight with Mothra, the tower was hit by Godzilla's atomic breath, when he attempted to attack Mothra, causing the tower to collapse.

When Godzilla blasts the meteor containing Monster X, a massive explosion results. When the dust cloud clears, it is revealed that Tokyo Tower, albeit still standing, is badly damaged, with much of its upper section tilting to one side. Ironically, it has suffered the least damage, with most of central Tokyo now nothing more than a sea of crumbling, burning ruins.

After descending into Tokyo in the form of a cloud of orange spores and then taking his true form, the Giant God Warrior eventually made his way to the area around Tokyo Tower. After standing still for several moments, the Giant God Warrior began firing his weaponry at buildings, eventually destroying the Tokyo Tower in a huge explosion using his purple laser beam, initiating the Seven Days of Fire that would eventually result in humanity's near-extinction.

6 months ago
Score 0
The Tokyo Tower is in Destroy All Monsters Melee but it is out of bounds.
Permalink
You are ignoring the author of this comment
Show comment | Manage ignore list

25 months ago
Score 0
So acccording to Ghidorah, the Three-Headed Monster, after that scene where the Tokyo Tower can be seen in the background while King Ghidorah is firing his gravity beams to the city of Tokyo, there's this next scene showing Ghidorah passing through the tower and causing it to collapse into the houses below. Image screenshot will be uploaded soon.
Permalink
↑ back to top ・ contents
Retrieved from "https://wikizilla.org/w/index.php?title=Tokyo_Tower&oldid=174679"
Categories: