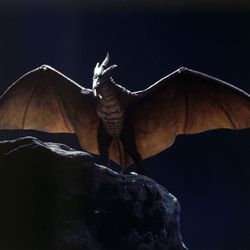 Adonoa Island (アドノア島,   Adonoatō) is a small fictional island in the Bering Strait, north of Japan and close to Russia and the United States, which first appears in the 1993 Toho Godzilla film, Godzilla vs. Mechagodzilla II.

A scientific expedition to the island discovered a remarkable scene. A giant irradiated Pteranodon called Rodan lived on the island, and fiercely defended an unhatched egg located in the same nest it hatched from. The egg periodically emitted psychic pulses, which attracted Godzilla to the island. Rodan bravely defended his unborn 'brother' from the nuclear kaiju, but was knocked out after landing hard against some rocks and being blasted by Godzilla's atomic breath. In the chaos that followed, the scientists managed to bring the egg back to Japan, where it hatched into BabyGodzilla.

After Godzilla's meltdown destroyed Birth Island, the radiation transformed LittleGodzilla into a sub-adult now called "Godzilla Junior." With nowhere to live, Junior began swimming back to his nest on Adonoa Island. Godzilla, now in critical mass, began to follow Junior back to the Bering Sea as well. Hoping to prevent Godzilla's meltdown from destroying the world, G-Force had Miki Saegusa use her telepathic abilities to lure Junior to Tokyo, hoping Godzilla would follow him there and fight and be killed by Destoroyah.


↑ back to top ・ contents
Retrieved from "http://wikizilla.org/w/index.php?title=Adonoa_Island&oldid=162923"
Categories: