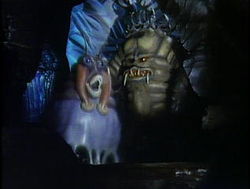 Tonchiki and Maoh in the Underground
Cave in Go! Greenman

The Underground Cave (地底の洞窟,   Chitei no Dōkutsu)[1] is a fictional location located beneath Ueno Park[2] in Tokyo, Japan, which first appears in the 1973 tokusatsu kaiju series, Go! Greenman.

The Underground Cave is a large cavern located 500 meters beneath Ueno Park[2] in Japan. It was presumably created by God himself before Maoh, the devil king and ruler of the Underworld, was banished there. After seemingly suffering from amnesia, Maoh's identity and situation was explained to him by his loyal underling Tonchiki who also resides there. Maoh is rendered immobile with his legs bound to the cave's floors and because of this, causes it to serve as the primary base of operations for him and his subordinates. Tonchiki and the minions often teleport to the surface world, leaving Maoh to look on from a viewing screen within the cave. The hero Greenman has entered the Underworld a multitude of times, both willingly or otherwise. Such examples include Greenman vs. Antguirus where the monster Antguirus incapacitates and drags Greenman into a tunnel to the Underworld, Greenman vs. Lorbabla where the monster Lorbabla creates a rupture in the ground leading directly into the cave and pushes Greenman into it, Greenman vs. Tonchiki where Greenman teleports to the cave to slap Maoh on the head before returning to the surface, and Greenman vs. Maoh where Greenman teleports to the cave once more to rescue two captured children and later electrocute Maoh once and for all using his Flash Shock ability.

This is a list of references for Underground Cave. These citations are used to identify the reliable sources on which this article is based. These references appear inside articles in the form of superscript numbers, which look like this: [1]


↑ back to top ・ contents
Retrieved from "http://wikizilla.org/w/index.php?title=Underground_Cave&oldid=129298"
Categories: