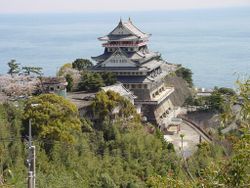 Atami Castle (熱海城,   Atamijō) is a castle in Atami, Shizuoka, Japan, constructed in 1959 as a tourist attraction. It appeared in King Kong vs. Godzilla and Gappa.

Godzilla and King Kong prepare to fight, with Atami Castle in the center in King Kong vs. Godzilla

After a battle that raged down from the flanks of Mount Fuji, King Kong and Godzilla arrived in the outskirts of Atami, continuing to fight, with the castle suddenly being caught between the two monsters. Godzilla and Kong traded punches at each other until the top of the castle was broken clean off. Godzilla then pushed against the building, causing most of it to collapse. Kong threw himself and Godzilla off the cliff next to the castle, and fell into the ocean below. After a short amount of time, Kong surfaced, victorious.

After coming ashore at Sagami Bay and laying waste to the city of Atami in a battle with ground forces of the JSDF, the two enraged adult Gappas continued in the search for their offspring, levelling Atami Castle during an assault from JASDF air units. Following the castle's destruction, the two parent monsters flew further inland before plunging into the depths of Lake Kawaguchi.


↑ back to top ・ contents
Retrieved from "http://wikizilla.org/w/index.php?title=Atami_Castle&oldid=164062"
Categories: