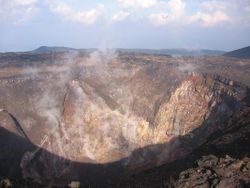 Mount Mihara (三原山,   Mihara-san) is an active volcano on the Japanese island of Izu Oshima. It is featured in the 1965, 1984, and 1989 films, Gamera, The Return of Godzilla, and Godzilla vs. Biollante respectively.

Godzilla plummets into Mt. Mihara in The Return of Godzilla

While researching a way to stop Godzilla, Dr. Makoto Hayashida discovered that, like birds, Godzilla could sense and follow magnetic signals in the Earth's atmosphere, and could potentially be led away from a populated area and into a trap using a similar signal. Hayashida contacted his colleague, geologist Dr. Minami, and the two formulated a plan to lure Godzilla to the summit of Mt. Mihara and trigger a controlled eruption, trapping Godzilla in the volcano's crater. Minami and Hiroshi Okumura planted explosive charges all along Mt. Mihara, while Hayashida completed a transmitter that would produce magnetic signals to lure Godzilla. While Godzilla battled with the Super X in downtown Tokyo, Hayashida was airlifted to Oshima Island to prepare the device. Godzilla was lured away from Tokyo, and climbed Mt. Mihara. Once Godzilla reached the crater, he stopped and looked down. With Godzilla in position, the charges were detonated, and Mt. Mihara erupted, causing Godzilla to plummet into the volcano's crater, trapping him under rivers of molten lava.

Godzilla escapes from his volcanic prison inside Mt. Mihara in Godzilla vs. Biollante

Five years after Godzilla was imprisoned in Mt. Mihara, the American genetics corporation/terrorist group Bio-Major planted explosives on Mt. Mihara and threatened to detonate them and release Godzilla if the Japanese government did not hand over their supply of G-Cells to Bio-Major. Dr. Kirishima and Colonel Goro Gondo met with Bio-Major agent John Lee and gave him the G-Cells, but the three were attacked by SSS9, a Saradian agent. SSS9 took the G-Cells and killed Lee, leaving the detonator still armed. Gondo and Kirishima attempted to disable the explosives, but ran out of time and Mt. Mihara erupted, unleashing Godzilla once again.


↑ back to top ・ contents
Retrieved from "http://wikizilla.org/w/index.php?title=Mount_Mihara&oldid=145677"
Categories: