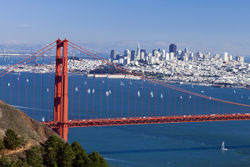 San Francisco is a large city in the United States of America. Various Godzilla media made in the United States have featured the city, while other kaiju have also attacked it. This is due to both San Francisco's prominence (including the famous Golden Gate Bridge) and the fact that this California metropolis is roughly in a straight line from Godzilla's native Japan (5,183.27 miles away).

A flock of Giant Mutant Hummingbirds that were mutated by polluted flowers in the redwood forests of California, and made their way to San Francisco, bringing down a military jet. H.E.A.T. traveled to San Francisco to investigate, accompanied by Godzilla. Godzilla was attacked by the giant hummingbirds but was unable to fight back due to the creatures' flight speed rendering them invisible. However, H.E.A.T. constructed a special pair of goggles that allowed Godzilla to detect the hummingbirds and fitted it to his head. Godzilla engaged the birds again and was able to defeat them all using a combination of his tail and atomic breath.

After a female MUTO emerged in Nevada, the United States Military developed a plan to lure both MUTOs to a remote island offshore of San Francisco using a nuclear warhead, who in turn would lure Godzilla. The military then planned to detonate the warhead, hoping to kill all three monsters with the force of the blast. Ishiro Serizawa objected to the plan, believing the warhead would fail to kill the creatures, and arguing that Godzilla could kill both MUTOs on his own. Despite Serizawa's protests, the warhead was flown over San Francisco Bay and armed, only for the male MUTO to disable the military's vehicles with its EMP and steal the armed warhead. The MUTO brought the warhead to Chinatown, where its female counterpart was waiting. The MUTOs nuzzled each other and then began building a nest. Meanwhile, Godzilla surfaced in San Francisco Bay, intent on stopping the MUTOs' reproduction. The military opened fire on Godzilla from both the sea and from the Golden Gate Bridge, but the monster was unaffected. Godzilla grabbed the bridge's cables, being struck on both sides by artillery and rockets. One blast struck Godzilla in the gills, causing him to jerk sideways and smash through the bridge. Godzilla continued on his way to the heart of the city, where he was intercepted by the male MUTO. The military, meanwhile, sent in an extraction team to recover the armed warhead from the MUTOs' nest. When the team arrived at the nest, Godzilla engaged the female MUTO in combat. The male came to assist its mate, leaving the nest unguarded. The soldiers removed the warhead from the MUTOs' cluster of eggs and tried to disarm it, to no avail. They then began carrying it to the docks, hoping to take it as far out to sea as possible on a boat before it detonated. One soldier, Ford Brody, stayed behind in the nest and opened a gas pipeline, which caused an explosion that destroyed all the MUTO eggs. The MUTOs ceased double-teaming Godzilla and went back to check on the nest. When the female discovered Brody was responsible, she prepared to kill him, only to be blasted from behind by Godzilla's atomic breath. The male MUTO attacked Godzilla again, allowing the female to chase the soldiers to the docks. Godzilla managed to kill the male by slamming his tail into it and impaling the MUTO on the 44 Montgomery building, which soon collapsed onto Godzilla. At the docks, the female MUTO began wiping out all of the soldiers, leaving only Brody to place the warhead on a boat. Before the boat could leave, the female MUTO's EMP field disabled it, and she prepared to finish the killer of her offspring once and for all. However, Godzilla grabbed the MUTO from behind and fired his atomic breath down her throat, decapitating her. Godzilla roared victoriously before collapsing from exhaustion, while Brody was rescued by a helicopter as the warhead detonated far offshore. The next morning, emergency workers were working tirelessly to rescue citizens from the underground shelters in the city, while the unconscious Godzilla was surrounded by military and scientists. Eventually, Godzilla awakened and wandered back out to sea, leaving the city's inhabitants pondering his status as the "savior" of their city.

The ruins of San Francisco, as seen in Godzilla: King of the Monsters

Following the battle between Godzilla and the MUTOs, San Francisco was left in its damaged state, and at some point completely abandoned. As Emma Russell noted in 2019, the unique radiation emitted by the monsters caused the city to become overgrown with vegetation.

San Francisco appears as an arena in the game Godzilla: Destroy All Monsters Melee, and is unlocked by playing through Adventure Mode as Mechagodzilla (Heisei Mechagodzilla in the American version and Kiryu in the Japanese version). Smaller versions of the arena, North and East San Francisco, appear in the game as well.

San Francisco returns as an arena in the sequel, Godzilla: Save the Earth. The city is slightly larger in this game, featuring AT&T Park as a destructible building. A smaller version of the arena centered around the Golden Gate Bridge is also available in the game.

San Francisco appears in Godzilla: Unleashed, where the crystal incursion has caused massive faults to open all over the city, destroying the Golden Gate Bridge and creating giant waterfalls on the edges of San Francisco Bay. In one level, the Vortaak Mothership will be flying above the city, and will later be brought down in San Francisco Bay, causing it to be tilted and partially flooded when the player travels there.

In Godzilla Unleashed: Double Smash, San Francisco is covered in volcanoes and volcanic faults, and is under attack by Baragon and Hedorah.

Godzilla, King of the Monsters (Marvel)

In issue #3 of Marvel Comics' Godzilla, King of the Monsters, Godzilla came ashore in San Francisco Bay and destroyed the Golden Gate Bridge, causing the Champions to mobilize against him. However, the combination of the efforts of Iceman, Hercules, Angel, Black Widow and S.H.I.E.L.D. were unable to stop Godzilla, and San Francisco was left in ruins as Godzilla waded back out to sea.

Various issues of Dark Horse Comics' Godzilla, King of the Monsters are set in San Francisco.

22 months ago
Score 0
The Volcano Monsters in 1957 is also takes place in San Francisco, but its exact plot or landmarks being destroyed is unknown, but very likely the Golden Gate is going to be featured as it is the longest bridge in the world at that time, and has appeared in It Came From Beneath The Sea two years ago.
Permalink
↑ back to top ・ contents
Retrieved from "http://wikizilla.org/w/index.php?title=San_Francisco&oldid=151873"
Categories: