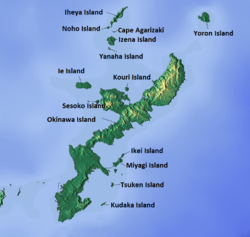 A map of Okinawa Island

Okinawa (沖縄本島,   Okinawa-hontō) is the largest of the Okinawa Islands and the Ryukyu (Nansei) Islands of Japan. Okinawa is featured in several Godzilla films.

Rodan briefly appeared flying over Okinawa, where he was sighted by the United States military.

The Black Hole Planet 3 Aliens established their base of operations under a mountain in Okinawa. In Gyokusen Cave, located on the island, an archaeological dig uncovered the statue of King Caesar, the legendary Shisa guardian of Okinawa and the Azumi royal family. When Kuronuma, the aliens' leader, heard about this, he ordered his agent Yanagawa to retrieve the statue before it could be used to awaken King Caesar. However, the aliens were too late and King Caesar was awakened from his ancient sleep. Kuronuma immediately deployed Mechagodzilla to destroy King Caesar, but before the mighty Shisa could fall, Godzilla arrived and joined the battle. Together, Godzilla and King Caesar managed to behead and destroy Mechagodzilla, while Nanbara, Hideto Miyajima, and Masahiko Shimizu killed Kuronuma and the other aliens and destroyed their base. King Caesar then returned to his resting place in the mountainside, and Okinawa was left in peace.

A Hatsuyuki-class destroyer pursuing Godzilla off the coast of Okinawa in Godzilla vs. Destoroyah

G-Force spotted Godzilla swimming in the waters just off the coast of Okinawa, and concluded that he was likely heading to the Japanese mainland to feed on the country's nuclear plants.

The Xiliens unleashed the monster King Caesar, who was under their mind control, in Okinawa, where he caused destruction across the island. Eventually, the Xiliens teleported King Caesar away, in order to make it appear that they had come to save the human race from the attacking kaiju. 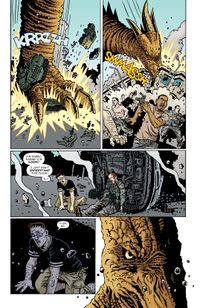 In Godzilla: Rulers of Earth #23, Lucy Casprell and her team traveled with the Shobijin to Okinawa in order to awaken the ancient guardian monster King Caesar in order to assist Godzilla against the Trilopod invasion. Once the group arrived in Okinawa, CKR forces planted explosive charges on a hillside and detonated them, revealing King Caesar sleeping. Suddenly, Battra arrived and attacked the group, causing Caesar to awaken. King Caesar and Battra battled until a group of Trilopods appeared and attacked both monsters. Battra retreated, while Caesar allowed himself to be subdued and captured by the Trilopods so that he could be taken to their hive in Los Angeles.


↑ back to top ・ contents
Retrieved from "http://wikizilla.org/w/index.php?title=Okinawa&oldid=127819"
Categories: