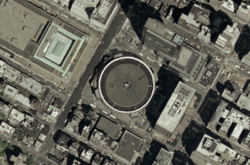 Madison Square Garden is a multi-purpose indoor arena located in Midtown Manhattan in New York City, situated atop Pennsylvania Station. It is featured in the 1998 TriStar Pictures Godzilla film, GODZILLA and its animated spinoff Godzilla: The Series.

While searching for Godzilla's nest in the subway tunnels under Manhattan, Nick Tatopoulos and Philippe Roache's team of French secret servicemen discovered a tunnel that had been dug by the monster directly into Madison Square Garden. Inside the arena, they discovered hundreds of Godzilla's eggs. As Nick and Philippe tried to determine how best to destroy the eggs, Audrey Timmonds and her cameraman Victor "Animal" Palotti found their way into the Garden as well. Just then, however, the eggs began hatching into countless Baby Godzillas, who caught the smell of fish on the humans and proceeded to chase them. Eventually, Philippe, Nick, Audrey and Animal sealed themselves inside the arena's media room, where they used the recording equipment to broadcast themselves on the local news, showing the Baby Godzillas roaming through the arena and warning of what would happen if they escaped. Anthony Hicks witnessed the broadcast and ordered two F-18 Hornets to blow up Madison Square Garden before the Baby Godzillas could get out. When the Baby Godzillas breached the media room, the humans used the air vents to escape and hurried to the building's exit, which was guarded by dozens of Baby Godzillas. With no time to spare before the building's demolition, Philippe fired his rifle at the chandeliers on the ceiling, causing them to fall onto the floor and scatter the Baby Godzillas long enough for the humans to reach the exit. Just after the humans ran out the door, the F-18s unleashed their payload onto Madison Square Garden, obliterating it and seemingly killing all of the Baby Godzillas.

After the adult Godzilla was finally killed on the Brooklyn Bridge, the people of New York celebrated, unaware that within the ruins of Madison Square Garden, a lone egg was hatching.

With Godzilla finally defeated, Nick Tatopoulos told Anthony Hicks that it was important to sweep the ruins of Madison Square Garden to ensure no Baby Godzillas had survived. Hicks reluctantly agreed and ordered a team of soldiers to do a quick sweep of the building's remains along with Nick. While rappelling down into the ruins, Nick accidentally fell into a pool of strange yellow liquid right next to a single egg. As Nick staggered to his feet, the egg hatched into a Baby Godzilla, which immediately imprinted on Nick and believed him to be its parent. Realizing the military would kill the hatchling if they saw it, Nick scared the infant with electrical wires, causing it to burrow out of the remains of Madison Square Garden to safety.


↑ back to top ・ contents
Retrieved from "http://wikizilla.org/w/index.php?title=Madison_Square_Garden&oldid=143853"
Categories: