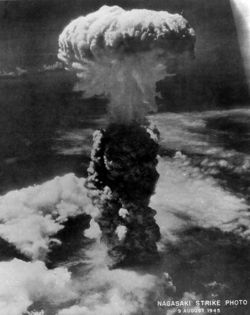 Nagasaki (長崎市 Nagasaki-shi) is the capital and the largest city of Nagasaki Prefecture on the island of Kyushu in Japan. It became a center of Portuguese and other European influence in the 16th through 19th centuries, and the Churches and Christian Sites in Nagasaki have been proposed for inscription on the UNESCO World Heritage List. Part of Nagasaki was home to a major Imperial Japanese Navy base during the First Sino-Japanese War and Russo-Japanese War. Its name means "long cape".

It is best known as one of only two cities in history to be targeted by a nuclear weapon, the other being Hiroshima, when the United States Army Air Forces (USAAF) dropped an atomic bomb called "Fat Man" on the city at 11:02 a.m. on August 9, 1945, near the end of World War II, killing 39,000–80,000 people in Nagasaki.


↑ back to top ・ contents
Retrieved from "https://wikizilla.org/w/index.php?title=Nagasaki&oldid=135448"
Categories: