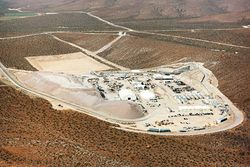 The Yucca Mountain Nuclear Waste Repository is a deep geological repository storage facility for spent nuclear fuel and radioactive waste located in Nye County, Nevada in the United States. The site was officially approved in 2002 and was expected to begin accepting spent nuclear fuel by 2017, however due to heavy political opposition the site was never officially opened and its funding was cut in 2011. It is featured in the 2014 Legendary Pictures Godzilla film, Godzilla, as an operational facility.

In 1999, the United States government took possession of a seemingly dormant and highly radioactive prehistoric spore that was discovered in a cave in the Philippines, storing it inside the still in-development Yucca Mountain Nuclear Waste Repository. In 2014, the male MUTO, which had hatched from another spore from the same cave, emerged from its cocoon at the Janjira nuclear plant in Japan and flew to the west coast of the United States, emitting echolocation signals to the other spore. When Monarch scientists Ishiro Serizawa and Vivienne Graham realized what the MUTO was doing, they told the American military to check the Yucca Mountain Repository. When a group of soldiers finally arrived at Yucca Mountain, they found a gaping hole in the facility, out of which the eight-legged female MUTO had emerged. The female MUTO then traveled to nearby Las Vegas before continuing to San Francisco to meet up with the male.


↑ back to top ・ contents
Retrieved from "http://wikizilla.org/w/index.php?title=Yucca_Mountain_Nuclear_Waste_Repository&oldid=128755"
Categories: