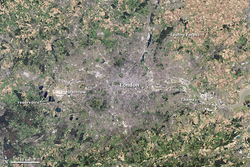 A Map of London and its surrounding landmarks and areas

London is a real world city in Europe, and the capital city of England. It has borne witness to several great giant monster battles, and the military has engaged several monsters near it. London also features in several games, most notably Godzilla: Destroy All Monsters Melee, Godzilla: Save the Earth and Godzilla Unleashed.

Godzilla, King of the Monsters!

Steve Martin, observing the chaos left by Godzilla's main attack on Tokyo, compares the destruction to that of the Blitz in London during the Second World War.

Tower Bridge, seconds before its destruction in The Last War

Following the destruction of Tokyo by an Alliance missile, London was one of several other cities to be attacked in the ensuing war. A nuclear missile exploded near Tower Bridge and the Tower of London, wiping both landmarks off the map in addition to the rest of the city.

Manda is deployed by the Kilaaks to attack London in England. After attacking the city off-screen, Manda departed from London to join Godzilla and Mothra's attack on Tokyo.

Gorgo was transported to London after being discovered off the coast of Ireland. Ogra, his mother, traveled to London to find him, and a battle between Ogra, Gorgo and the British military ensued. After destroying several of the city's landmarks, Ogra found and rescued her son from the enclosure he was being contained in, and the two monsters left peacefully.

Bilusaludo UFOs over Westminster, London in GODZILLA: Planet of the Monsters

Dogora attacked London in September 2002, causing 3.9 million deaths. London was also the location of the Bilusaludo's first contact with Earth; fleets of their spaceships entered the Earth's atmosphere over the United Kingdom, and were observed hovering over Westminster.

29 months ago
Score 0
I'll love to see Manda's rampage in London, but it is cut in the final film including Mothra's attack in Beijing. I guess it is cut due to budget issues that they were unable to build more sets of cities.
Permalink
↑ back to top ・ contents
Retrieved from "http://wikizilla.org/w/index.php?title=London&oldid=156150"
Categories: