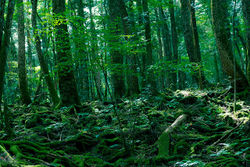 The Aokigahara (青木ヶ原,   Aokigahara), also known as the Suicide Forest (自殺の森,   Jisatsu no Mori, lit. Forest of Suicide) or Sea of Trees  (樹海,   Jukai, lit. Tree Sea), is a 35-square-kilometer forest that lies at the northwest base of Mount Fuji in Japan. It is featured in several Toho kaiju films, including Destroy All Monsters, Rebirth of Mothra III, and Godzilla, Mothra and King Ghidorah: Giant Monsters All-Out Attack.

After the crew of the Moonlight SY-3 successfully destroyed the Kilaaks' monster control device on the moon, the United Nations Science Committee used their facility on Monsterland to direct all of Earth's kaiju to Mount Fuji to assault the Kilaaks' Earth base. Godzilla, Minilla, Mothra, Rodan, Anguirus, Gorosaurus, Manda, Baragon, Varan, and Kumonga all assembled in the Aokigahara, ready to march on the Kilaaks' underground base, when King Ghidorah suddenly appeared in the sky. The Kilaaks had summoned King Ghidorah as their trump card, as he could not be controlled by the UNSC and was far more powerful than any of the individual Earth kaiju. King Ghidorah landed in the Aokigahara and attacked the Earth kaiju, who fought back fiercely. Anguirus latched onto King Ghidorah's neck with his jaws, but the space monster took flight and pulled Anguirus free with one of his mouths, sending him crashing to the forest below. King Ghidorah turned his attention to Godzilla and his allies, with Anguirus rejoining the battle. Godzilla grappled with his arch-enemy, while Gorosaurus delivered a devastating kangaroo kick to King Ghidorah's back. With their enemy knocked to the ground, Godzilla and his allies stomped King Ghidorah's heads into the dirt, causing them to cough up blood. Minilla choked off King Ghidorah's middle neck with a smoke ring, while Mothra and Kumonga encased their fallen foe in webbing. While the Kilaaks managed to destroy the Monsterland control facility with one of their UFOs, the Earth monsters knew who their true enemy was and continued approaching the Kilaak base. Godzilla found the base near the Aokigahara and broke into it, forcing the Kilaaks to revert to their true state and destroying all of the advanced alien machinery within. The base then violently exploded, with the ground in the Aokigahara splitting open and swallowing King Ghidorah's lifeless body into the fiery abyss.

Rainbow Mothra in Aokigahara in Rebirth of Mothra III

In 1999, a meteor shower was raining over the night skies over Japan with one meteorite crash down in the Aokigahara region of Mount Fuji. Moll and Lora examined the remains of the crashed meteor, realizing that King Ghidorah had escaped, and sensing a great evil had been released. King Ghidorah emerged from the meteor to attack Tokyo and began to feed on humans, mainly children, but he soon started to eat adults. King Ghidorah built a dome in the Mount Fuji area where he kept his victims and absorbed their life forces. King Ghidorah scoured Japan, transporting his prey inside of a pulsating feeding dome hidden within Fuji forest. Rainbow Mothra arrived and battled King Ghidorah, but Leo's beams were repelled by space monster's force barrier. King Ghidorah easily defeated Rainbow Mothra. After Leo was healed from his battle and transformed into Light Speed Mothra, Moll sent him back in time to attack Cretaceous Ghidorah when he first arrived on Earth and was not so powerful.

When Leo killed Cretaceous King Ghidorah, King Ghidorah and the dome disappeared, freeing the trapped children and the fairies. However, King Ghidorah reappeared in the sky amidst a massive fireball and resumed his reign of terror. Leo was reborn from his cocoon as Armor Mothra and engaged King Ghidorah in battle again. Armor Mothra sliced off King Ghidorah's left wing with his own razor-sharp wing then completely destroyed him with his Excel Dash Buster.

A suicidal man attempted to hang himself from a tree in the Aokigahara. The man tied his tie to a tree branch and stood atop a fallen shrine, only for the ground beneath him to collapse and cause him to fall into a cavern. In the cavern, the man saw King Ghidorah, a three-headed dragon that was frozen in ice. Later, the prophet Hirotoshi Isayama traveled to the cavern and awakened Ghidorah so he could help Mothra defeat Godzilla.


↑ back to top ・ contents
Retrieved from "http://wikizilla.org/w/index.php?title=Aokigahara&oldid=155745"
Categories: