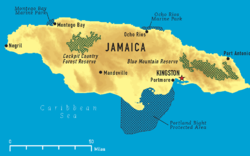 Jamaica is an island country located in the Caribbean Sea. It is featured in the 1998 TriStar Pictures film GODZILLA, and the spin-off animated TV series Godzilla: The Series.

After a Japanese fishing ship was destroyed by Godzilla, the remains of the ship washed ashore in Jamaica. Niko Tatopoulos was brought on site to investigate the large footprints and large claw marks in the ship, and the high amounts of radiation.

Some time after Godzilla's death at the hands of the military in New York, his footprints left in Jamaica became a tourist attraction. Some beach swimmers then started to mysteriously vanish under the waves. Rescue boats searching for any survivors suffered the same fate. The officials put the blame on the yet to be located infant Godzilla. Nick dismissed that as impossible, as the young monster has been with them all day. Nick's team then decided to investigate the mysterious disappearances, as they could be the work of another mutation

While Nick and Randy stayed at the headquarters to determine who called in Major Hicks on the juvenile Godzilla, Elsie, Craven, and N.I.G.E.L were sent to Jamaica to investigate the disappearances. While studying some tar on the beach line, Elise noticed a pulse coming from a pile of tar. A fish then broke out of the pile, barley alive. After studying the tar and the fish, the two determined the tar must serve as a pre-digestive process for another creature, draining victims of all electrolytes and nutrients, but also keeping them alive. Elsie relayed the information to Nick via phone, however the call was interrupted when the two were attacked by several large squids. Nick, Randy, and Monique arrived later, but could only find the remains of Elsie and Craven's boat. Fortunately, Randy was able to locate N.I.G.E.L's signal, and bring the robot, and Elsie and Craven, back to the surface, covered in tar. After removing the tar from Elsie and Craven, the group was attacked by the squids. One managed to ensnare Nick, however before it could make him it's next victim, the now fully grown Godzilla arrived and attacked the squids, defending his "adoptive father". The group then investigated the squid carcasses that washed ashore, and found that some where charred by Godzilla's atomic breath, others were drained of nutrients themselves. Nick theorized the squids may not be the apex predator they assumed, but part of a larger food chain. Suddenly, the Crustaceous Rex surfaced. The monster attempted to feed on a nearby squid, but found it couldn't siphon any tar from the squid's burnt corpse. The C-Rex then turned it's attention to a nearby town, attempting to find a substitute food source. The military tried to stop the creature, but proved to be ineffective. Godzilla then arrived and battled the monster. The fight then took to a nearby cliff, where Godzilla burrowed along the ridge, attempting to cause the edge to cave in, and take the C-Rex with it. The strategy worked, but the C-Rex ensnared Godzilla and dragged him down in the fall. Both buried under rubble. Godzilla emerged, and became targeted by the military. Godzilla dove into the water, and was able to rescue the surviving swimmers and boat crew, and bring them and the boats back to the surface. Seeing this act, Major Hicks decided to spare Godzilla, and allow him to go. However made it clear to Nick that he didn't want the worm scientist to make him regret this.


↑ back to top ・ contents
Retrieved from "http://wikizilla.org/w/index.php?title=Jamaica&oldid=128769"
Categories: