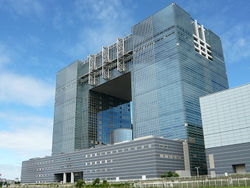 The Tokyo Telecom Center (東京テレコムセンター,   Tōkyō terekomusentā) is a observatory located in the Koto district of Tokyo, Japan. It is composed of two twin 24-story towers, standing at 99 meters (325 feet) high. It is featured in the 1995 and 2000 Godzilla films, Godzilla vs. Destoroyah and Godzilla vs. Megaguirus.

Police arrive at the Telecom Center in Godzilla vs. Destoroyah

One night, several overpasses in downtown Tokyo were mysteriously destroyed, with several large creatures being sighted. The creatures eventually entered the Telecom Center, with SWAT teams arriving on the scene to respond. The SWAT officers loaded their rifles and entered the building, where they were attacked by the creatures. The creatures tossed the officers around with their tails and blasted them with their Micro-Oxygen beams, shrugging off all of the weapons the officers fired at them. Eventually, the SWAT officers began using rocket launchers against the creatures, which successfully destroyed some of them. Outside the Telecom Center, Yukari Yamane was reporting on the scene. Suddenly, one of the creatures emerged from the building and chased after her. Yukari tried to hide in her car, but the creature blasted the car in half with its beam and tried to inject her with Micro-Oxygen using its secondary jaw. Thankfully, Kensaku Ijuin arrived with a SWAT team and rescued Yukari. The officers then killed the creature with a flamethrower.

Godzilla and Megaguirus battle near the Telecom Center in Godzilla vs. Megaguirus


↑ back to top ・ contents
Retrieved from "http://wikizilla.org/w/index.php?title=Tokyo_Telecom_Center&oldid=156096"
Categories: