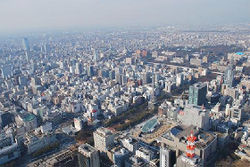 Nagoya (名古屋市,   Nagoya-shi) is the fourth-largest city in Japan. It is the capital of Aichi Prefecture, the largest city in the Chūbu region, and is one of Japan's major Port cities. It first appeared in Mothra vs. Godzilla.

Godzilla had been rampaging through the countryside for several hours, when he begun to approach the historical city of Nagoya. Between him and the city stood Nagoya Castle, which he quickly tore to pieces, before entering the city and begun to raze it to the ground. 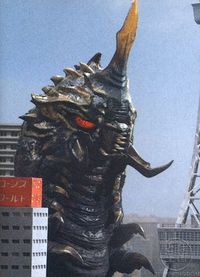 In 1993, Nagoya was attacked by the larval form of Battra, who had been awakened by a meteor impact in the North Sea and was now traveling across Japan to engage Mothra in combat. The JSDF deployed a squadron of their new MBAW-93 Maser Cannons to engage Battra in the city. After destroying Nagoya Castle and Nagoya Tower, Battra fought back against the JSDF, making quick work of the Maser Cannons before returning to the ocean and continuing on his way.

20 months ago
Score 0
Nagoya was also mentioned in Godzilla vs Biollante.
Permalink
↑ back to top ・ contents
Retrieved from "http://wikizilla.org/w/index.php?title=Nagoya&oldid=126781"
Categories: