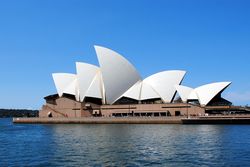 The Sydney Opera House is a famous landmark and performing arts center located in Sydney, Australia.

Godzilla and Zilla face off near the Sydney Opera House in Godzilla: Final Wars

After escaping from Area G in Antarctica, Godzilla made his way north to Australia. The Xilien leader X unleashed the monster Zilla in Sydney to intercept Godzilla. Godzilla and Zilla exchanged roars, and Zilla pounced at his enemy. Godzilla anticipated the attack and quickly swung his tail at Zilla, launching him directly into the Sydney Opera House. Godzilla wasted no time and fired his atomic breath, annihilating both Zilla and the Sydney Opera House.


↑ back to top ・ contents
Retrieved from "https://wikizilla.org/w/index.php?title=Sydney_Opera_House&oldid=174599"
Categories: