Sydney is the most populated city in Australia and is notable for being attacked by Zilla in the 2004 Godzilla film Godzilla: Final Wars.

Godzilla and Zilla face off in Sydney in Godzilla: Final Wars

One day, as kaiju appeared all over the world, the monster Zilla appeared in Sydney, wreaking havoc on the populace. Suddenly, a UFO appeared over the city and teleported Zilla away.

Later, when the Xiliens' plan was exposed and Godzilla was freed from Antarctica, the Controller of Planet X teleported Zilla back to Sydney to destroy Godzilla. Zilla lunged at Godzilla, but Godzilla used his tail to smack Zilla into the Sydney Opera House. Godzilla then blasted Zilla with his atomic breath, annihilating both Zilla and the famous landmark.

Dagahra attacks Sydney in GODZILLA: Planet of the Monsters

Dagahra approached Australia on Christmas Day, 2017, but the navy did not attack out of fear of releasing Barem into Australian waters. Dagahra made landfall in Sydney and devastated the city before moving on to Newcastle.[2] 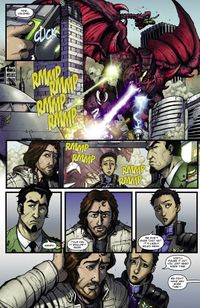 This is a list of references for Sydney. These citations are used to identify the reliable sources on which this article is based. These references appear inside articles in the form of superscript numbers, which look like this: [1]

22 months ago
Score 0
Attacked by Daghara in December 2017, and than four months later the city is still fine. :P
Permalink
↑ back to top ・ contents
Retrieved from "http://wikizilla.org/w/index.php?title=Sydney&oldid=141210"
Categories: