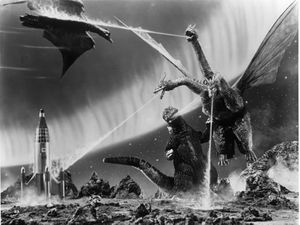 Godzilla, Rodan, King Ghidorah and the P-1 on Planet X

Planet X (X星,   Ekkusu Sei, lit. X Star) is the home planet of the Xiliens. It is the main setting for the space battle between Rodan, Godzilla and King Ghidorah in Invasion of Astro-Monster.

Planet X is the first location outside of Earth which kaiju are shown to visit, and is to this day the only extraterrestrial location which Godzilla has visited in any of the films. It is also the place where Godzilla performs his famous "victory dance" after defeating King Ghidorah.

Planet X seems to have an atmosphere. It also seems to have a similar gravity as Earth's, since Godzilla, Rodan, and King Ghidorah seem to walk, jump, and fight without any gravitational interference. It may also possess oxygen and carbon dioxide since the Xiliens and monsters are shown breathing on the planet's surface. However, the astronauts still wore spacesuits with helmets on the planet's surface, while the Xiliens and monsters may not necessarily require oxygen to breathe, so it is not certain whether or not Planet X possesses oxygen or carbon dioxide in its atmosphere.

Planet X appears as the final planet visited by the player in the game, where they must fight all the Kaiju from the previous planets plus King Ghidorah. After Godzilla and Mothra defeat all the Kaiju, the game is won. In this game, Planet X is placed beyond the orbits of Neptune and Pluto.


↑ back to top ・ contents
Retrieved from "http://wikizilla.org/w/index.php?title=Planet_X&oldid=158629"
Categories: