Godzilla: Monster of Monsters! (ゴジラ,   Gojira, lit. Godzilla) is a 1988 game developed by Compile for the Nintendo Entertainment System. It was released in Japan in 1988, and in the United States the following year. It is the first console game to feature Godzilla, and is notable for its large roster of characters and devices from Toho's science-fiction films, including many which have never appeared in a Godzilla film before or since. 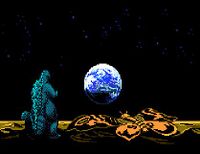 The invaders from Planet X attack the Earth as part of their plan to conquer the entire universe using a legion of space monsters. The Earth sends Godzilla, king of the monsters on the Earth, and Mothra, to defend itself. Godzilla advances through battle stages called Ring Fields provided in interplanetary space to battle that legion of space monsters controlled by Planet X. Godzilla must battle its way from one Ring Field to another, and finally defeat King Ghidorah at Planet X to defend Earth. For the sake of the future of the Earth, Godzilla's fierce battle now begins..." 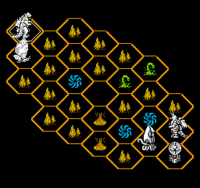 Both Godzilla and Mothra start the game at level 1, and with a limited supply of life and power. The monsters can gain levels by defeating bosses and certain stage types (Ruins and Hyperspace); every time Godzilla or Mothra gains a level their life and power bars will increase. The maximum level is 16.

The life bar will replenish once a boss is defeated, or when a Life Capsule is picked up. The power bar recovers by itself over time, and the more life the monster has the faster it recovers.

Each world takes place on a grid, with hexagonal spaces serving as stages. Godzilla can move two spaces per turn, while Mothra can move four (in the Japanese version, Godzilla can only move one space, while Mothra can move two). After the monster moves through those spaces, it will enter the game's sidescrolling action sections, where it has to fight through waves of enemy tanks, spaceships, etc. To move to the next world, the remaining monster(s) must move onto the Base Headquarters stage. On the following turn, the player must select the monster without moving and the game gives the option to advance to the next world. If either Godzilla or Mothra died before advancing, the deceased monster will reappear in the next world; however, the revived monster will lose one level as a result. Things to note: if Godzilla or Mothra advances to the next level, and the other monster left behind is destroyed, the game will be lost. In addition, there is a chance that while exploring the levels, the player can encounter a 'Hyperspace' area. These areas feature battles against the Gohten from The War in Space, Dogora cells, or Matango. Clearing these areas can reward the player with another level.

Each world hosts 2-8 bosses, depending on how far the player is, who will attack the player on their way to the enemy base. The player doesn't have to beat the bosses, with the exception of King Ghidorah, to advance in the game, but in general they will be hard to avoid and confrontation is inevitable. Things to note: boss matches (or "Hyper-Fight Mode") last approximately 40 seconds before the match is ended in a draw and both monsters are returned to the Ring Field view; in case of a draw, the enemy kaiju will have its health restored slightly (this differs between the U.S. and Japanese version of the game). 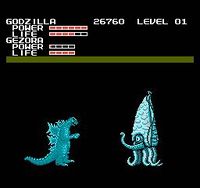 Godzilla: Monster of Monsters! features eight bosses, several of whom had not yet appeared in a Godzilla film up to this point. A new boss is added every world, which the player will fight along with the previously defeated monsters. The bosses are: 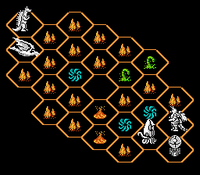 The two unused board sprites for Anguirus and Rodan

Through examining the game's coding and sprite data, Rodan and Anguirus have been discovered. Anguirus, called "ANGILAS," is playable in the Japanese version of Godzilla: Monster of Monsters! through cheat codes. However, he doesn't have any attacks other than a "destructive walk." Rodan has a board piece in both versions, while sprites for him exist in the game's coding.[1] An unused sprite for Hedorah's flying form can be seen in the game's end credits. 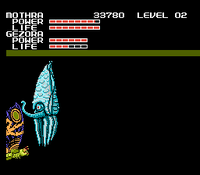 Gezora trapping Mothra in the corner of the stage

Some glitches in the game can have favorable benefits to the player, while others serve only to slow them down. Gezora can infamously trap the player in the corner of the boss fight and repeatedly deal damage to them until the timer runs out. On the other hand, Moguera can sometimes get stuck in its beam charging animation temporarily, allowing the player to land more hits on the mech.

This is a list of references for Godzilla: Monster of Monsters!. These citations are used to identify the reliable sources on which this article is based. These references appear inside articles in the form of superscript numbers, which look like this: [1]

Showing 18 comments. When commenting, please remain respectful of other users, stay on topic, and avoid role-playing and excessive punctuation. Comments which violate these guidelines may be removed by administrators.

↑ back to top ・ contents
Retrieved from "http://wikizilla.org/w/index.php?title=Godzilla:_Monster_of_Monsters!&oldid=165677"
Categories: