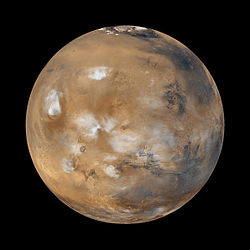 Mars is the fourth closest planet to the sun, and the fourth and final inner planet of the Solar System. It is occasionally referenced or makes appearances in Toho's Godzilla series and other tokusatsu movies. The popularity of space movies in the latter half of the twentieth century meant that other film companies, such as Daiei and Shochiku also made films that were at least partially set on Mars.

The Mysterians are known to have been inhabiting Mars prior to the events of The Mysterians due to the destruction of their home planet Mysteroid, but travel to the Moon to plan an invasion of Earth, because Mars yields too few resources to sustain their population.

In this film's American dub, all references and instances where Venus was mentioned are replaced, with characters describing the same events taking place on Mars instead.

In this film, the Xiliens' home planet, Planet X, is mentioned to be between the orbits of Mars and Jupiter. However, the proximity of Jupiter in the Planet X sky suggests that Planet X is closer to the latter planet than the former.

After Gamera is attracted to a rocket by fire, he is successfully attached to it and launched into space. The rocket then began to travel towards Mars, but at some point in the journey Gamera managed to break free and begin his journey home.

Much like the Xiliens, the Kilaaks' home planet is also located between Mars and Jupiter. However, it is never shown exactly what their planet looks like.

Desghidorah first appeared on Mars, destroying all life on the planet and converting it into its current state.

Mars is the second planet visited by Godzilla and Mothra in the game. Here, Mars is shown to be quite unlike the way it is in real life. Volcano levels are extremely common on the planet. In addition, Mothra and Godzilla must fight both Moguera and Gezora, who have followed them from Earth, but must also fight Varan.


↑ back to top ・ contents
Retrieved from "http://wikizilla.org/w/index.php?title=Mars&oldid=126981"
Categories: