Godzilla vs. Megalon (ゴジラ対メガロ,   Gojira tai Megaro, lit. Godzilla Against Megalon) is a 1973 tokusatsu kaiju film produced by Toho, and the thirteenth installment in the Godzilla series as well as the Showa series. The film was released to Japanese theaters on March 17, 1973.[2]

Underground nuclear testing in the Aluetian Islands damages the undersea kingdom of Seatopia, whose angry inhabitants send their guardian monster Megalon to the surface to seek revenge on humanity. Inventor Goro Ibuki, his brother Rokuro, and his best friend Hiroshi Jinkawa find themselves caught up in the Seatopians' plan, as they plan to use Goro's invention, the robot Jet Jaguar, to guide Megalon. Goro manages to free Jet Jaguar from the Seatopians' control and sends him to Monster Island to recruit Godzilla's help. The stage is set for a colossal tag-team battle when the Seatopians recruit the aid of the evil cyborg kaiju Gigan from the M Space Hunter Nebula Aliens, with Godzilla and Jet Jaguar facing off against Gigan and Megalon.

The underground civilization Seatopia has been heavily affected by nuclear testing conducted by the surface nations of the world. The nation's people, the Seatopians, watch in horror as a nuclear test conducted near the Aleutian Islands critically damages Monster Island. Godzilla, Rodan and Anguirus had been resting on the island when a huge fissure generated by the test ripped the idyll in two. As Godzilla called out for his friends, Rodan and Anguirus fell down the growing chasm. The earthquake generated by the test that destroyed Monster Island also left the capital city of Seatopia in ruins. Naturally upset by this, they unleash their civilization's protector, Megalon, to the surface to destroy those who would — unknowingly or not — destroy them. The ground opens to reveal Megalon, who goes on a rampage outside of Tokyo. Meanwhile, two Seatopian Agents attempt to steal the newly constructed super-robot Jet Jaguar, which can be used to guide and direct Megalon. They also capture the robot's inventor, Goro Ibuki, his kid brother Rokuro and their friend Hiroshi Jinkawa. One of the Agents stays with Jinkawa and directs Jet Jaguar towards Megalon. The other agent takes Rokuro and Goro into a cargo container and bribes a pair of truckers to dump the container in the lake. Things get out of hand, though, and the Seatopian agent is thrown from the truck after threatening the two truckers with a pistol. Soon afterward, Jinkawa, Goro and Rokuro are reunited and try and convince the Military into using Jet Jaguar to re-direct Megalon, who is attacking Tokyo. Goro manages to regain control using his hand-held voice-command devise, and sends Jet Jaguar to Monster Island to bring Godzilla back to fight Megalon. An extended fight scene then takes place, with Godzilla and Jet Jaguar, the latter newly giant-sized and self-directed, fighting Megalon in a generic small field. The Seatopians, however, summon Gigan to aid Megalon. The film ends with Megalon and Gigan (who for the second time abandons an ally) defeated, Godzilla returning to Monster Island, and Jet Jaguar returning to his previous, human-sized state, reuniting with Goro, Rokuro and Jinkawa.

In mid-to-late 1972, Toho held a contest for elementary school children to design a robot who would appear in the next Godzilla film.[3] The winner's creation was named "Red Alone," which superficially resembled both Ultraman and Mazinger Z. The character was renamed Jet Jaguar for its inclusion in the film.

While Godzilla vs. Megalon was made over the course of six months, its allocation of time was unusual.[4] As special effects director Teruyoshi Nakano recalled, "That movie seemed to take forever to develop, then it went into production without enough preparation."[5] Due to the time constraints, screenwriter Shinichi Sekizawa simply provided a story outline, while director Jun Fukuda wrote the script. Principal photography started immediately thereafter and took place over approximately three weeks. 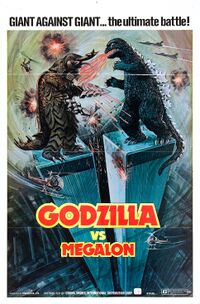 In 1976, CinemaShares released a dubbed version of Godzilla vs. Megalon theatrically. Riding the coattails of Dino De Laurentiis' big-budget King Kong remake, poster art showed Godzilla and Megalon battling on top of the World Trade Center, despite the fact that no scenes were set in New York.

To obtain a G-rating from the MPAA, CinemaShares cut three minutes of footage, including:

With this being the second of the three CinemaShares Godzilla releases, the publicity factor was high. Along with the poster, buttons with one of the four kaiju's faces on them were released. A couple of weeks before the release of Godzilla vs. Megalon, CinemaShares had a comic book released to promote the film, but in the comic there are numerous errors present in the monster's names and locations and events. The theatrical trailer for the film also contain these errors, such as Jet Jaguar being called "Robotman."

When Godzilla vs. Megalon was released on March 17, 1973 in Japan, it only sold 980,000 tickets, making it the first Godzilla film to sell less than a million tickets.

Godzilla vs. Megalon has been widely disliked among critics and fans. Common sources of criticism revolve around the film's extensive use of stock footage, the Godzilla suit used in the film, and the film's overall tone.

Before Media Blasters acquired the rights to Godzilla vs. Megalon, numerous American companies distributed fullscreen versions of the film on unlicensed VHS and DVD releases, operating under the impression that it was in the public domain.

This is a list of references for Godzilla vs. Megalon. These citations are used to identify the reliable sources on which this article is based. These references appear inside articles in the form of superscript numbers, which look like this: [1]

2 months ago
Score 0
What is the context of Godzilla with a telephone pole in his mouth?
Permalink
You are ignoring the author of this comment
Show comment | Manage ignore list

27 months ago
Score 0
"Gorgo and Superman Meet in Tokyo", this is the most random movie title I've ever seen not counting the Pakistanian Pulgasari title.
Permalink
You are ignoring the author of this comment
Show comment | Manage ignore list

32 months ago
Score 1
"There are no female characters in this movie except for the Seatopian dancers"... wow.
Permalink
You are ignoring the author of this comment
Show comment | Manage ignore list

39 months ago
Score 0
My opinion: This film is far from a masterpiece, but it's sill my favourite due to it's goofy vibe and cool monsters
Permalink
You are ignoring the author of this comment
Show comment | Manage ignore list

My Thoughts: Godzilla vs Megalon

Oh, how I adore this movie. Godzilla vs Megalon is often looked down upon for its cheesiness, but it thats the reason I love it: it's cheesy in all the right ways, like good old fashioned superhero story. The tone of the film is just off-the-wall insanity (though not to the same extent as Smog Monster).

The plot is hardly new; in a way it's just a variation of the worn out monster-controlled-by-alien story, just involving beings from beneath the earth as opposed to beyond it. The human/Seatopian characters aren't very interesting, though they're not overly annoying either. These scenes are better tolerated with the heckling of the cast of MST3K.

The monster scenes are the most entertaining element of the film, and boy are they entertaining... You have Megalon, who is both goofy and badass at the same time; Jet Jaguar, who is just plain goofy; Godzilla's new design is a welcome change from the suit that had been used in the previous several films, and Gigan's return is welcome. The fight scenes are just pure cheesy goodness; from Megalon trashing the city via stock footage to Godzilla's legendary tail slide dropkick. You could tell they were having a ball making this.

Overall, if you don't like the goofy side of Godzilla, or have an aversion to stock footage and implausible fight scenes, you probably won't like this one. But if you're looking for a Godzilla equivalent to, say, the Adam West Batman show, look no further.
Permalink
You are ignoring the author of this comment
Show comment | Manage ignore list

41 months ago
Score 1
People say the tail slide is the best thing about this movie. In my opinion, the best part is Godzilla and Jet Jaguar's escape from the ring of fire. Godzilla grabs on to Jet Jaguar's back and they fly to safety together! It's hilarious!
Permalink
You are ignoring the author of this comment
Show comment | Manage ignore list

2 months ago
Score 0
Agreed.
Permalink
↑ back to top ・ contents
Retrieved from "http://wikizilla.org/w/index.php?title=Godzilla_vs._Megalon&oldid=152420"
Categories: