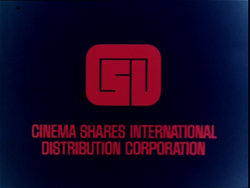 Cinema Shares was an American film distributor who imported three consecutive entries in the Showa Godzilla series. They edited all three films for swearing, violence, and/or nudity in order to receive G ratings from the MPAA. The company folded in 1986.

This is a list of references for Cinema Shares. These citations are used to identify the reliable sources on which this article is based. These references appear inside articles in the form of superscript numbers, which look like this: [1]

↑ back to top ・ contents
Retrieved from "http://wikizilla.org/w/index.php?title=Cinema_Shares&oldid=167725"
Categories: