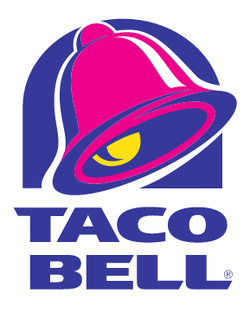 Taco Bell is an American fast-food chain founded by Frank Bell in 1962. It is famous for creating a variety of Mexican style dishes in the fast-food format. In order to promote the release of the 1998 film GODZILLA, Taco Bell released Godzilla-themed merchandise, and also aired a commercial featuring Godzilla.

As part of the promotion, Taco Bell produced Godzilla toys to be distributed with their kid's meals, or sold individually with the purchase of a kid's meal for 99 cents. They include:

Taco Bell also produced four collectible cups featuring Godzilla designs and a Godzilla cup holder designed for use in automobiles. The cups featured peel-away sheets with codes on them that, if a special decoder was used, could reveal a picture of Godzilla. If the player found Godzilla they could redeem the ticket for a prize.

Taco Bell released a special Yo Quiero Taco Bell toy dog that, when squeezed, repeated a line from the company's commercial featuring Godzilla.

This is a list of references for Taco Bell. These citations are used to identify the reliable sources on which this article is based. These references appear inside articles in the form of superscript numbers, which look like this: [1]

BTW, anyone ever heard the song "I Ran Over the Taco Bell Dog" by Adam Sandler?
Permalink
You are ignoring the author of this comment
Show comment | Manage ignore list

10 months ago
Score 0
What do you mean,like it's bad tasting or like it makes you use the bathroom multiple times?
Permalink
You are ignoring the author of this comment
Show comment | Manage ignore list

42 months ago
Score 0
I have 2 of the cup holders.
Permalink
↑ back to top ・ contents
Retrieved from "http://wikizilla.org/w/index.php?title=Taco_Bell&oldid=143845"
Categories: