In this series, King Kong befriends the Bond family, with whom he goes on various adventures, saving the world from monsters, robots, aliens, mad scientists, and other threats. 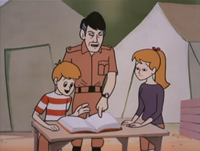 Disclaimer: As many later episodes of the series never received proper re-airings since their initial broadcasts and the series as a whole has never been fully released to home video, details are scarce. The following list was compiled from external sources, and as such, may be incomplete.

Other original monsters that are currently unconfirmed as appearing in the show include a giant one-horned dragon; a fire-breathing panther; a giant jellyfish; an orange bipedal dinosaur-like monster, possibly exclusive to a Japanese notebook cover; a green 'insect-lizard,' possibly exclusive to the artwork seen on a Magic Slate border; a subterranean dinosaur, heavily resembling Telesdon from Ultraman, from an unknown Japanese picture book; a burrowing scorpion-like beast, also from a Japanese picture book; a green-colored 'Android Kong,' possibly an off-model Mechani-Kong, from a Japanese children's book; a big-eared, red and yellow colored robot humanoid and a horde of giant ants, both possibly originating from a Japanese spin-off manga.

This is a list of references for The King Kong Show. These citations are used to identify the reliable sources on which this article is based. These references appear inside articles in the form of superscript numbers, which look like this: [1]

↑ back to top ・ contents
Retrieved from "http://wikizilla.org/w/index.php?title=The_King_Kong_Show&oldid=156707"
Categories: