Dr. Who: “He's exactly like the original Kong. With this, the world is ours.”
Madame Piranha: “It's still not the original. You sure you didn't just build a giant toy?”
Dr. Who: “A toy? That's an insult! How can you say that? It is the strongest thing there is in the world today!”
― Dr. Who reveals Mechani-Kong to his benefactor Madame Piranha (King Kong Escapes)

Mechani-Kong is the creation of the villainous Dr. Who, a mad scientist bent on world domination and the sworn enemy of King Kong. In The King Kong Show and its tie in media, Mechani-Kong is frequently deployed by Dr. Who to try and destroy Kong or menace his human allies. In King Kong Escapes, Mechani-Kong was instead built by Dr. Who for the purpose of mining the highly-radioactive Element X. When the radiation damaged the machine, Who resorted to kidnapping the real Kong from his home of Mondo Island to force him to dig for the element instead. However, Kong was able to resist the madman's control and escaped Who's Arctic base. Dr. Who repaired Mechani-Kong and sent him to Tokyo to kill Kong in retaliation. After a pitched battle atop the Tokyo Tower, Kong defeated his robot double and sent the machine plummeting to its doom on the streets below. Toho planned to revive Mechani-Kong for several Godzilla film projects in the Heisei series, but legal concerns regarding use of the character caused these films to be scrapped. Mechani-Kong did make an appearance in Kodansha's Godzilla, King of the Monsters manga in the early 1990's.

Mechani-Kong's name comes from the word "mechanical" and the "Kong" part of King Kong's name. In the Japanese version of The King Kong Show and the the U.S. release of King Kong Escapes, he is called Robot Kong (ロボットコング,   Robotto Kongu), while the American poster for the film calls him the King Kong Robot.[6] Mechani-Kong's Japanese name is sometimes spelled with an interpunct as メカニ・コング.[3]

Eiji Tsuburaya with the Mechani-Kong and King Kong suits

For King Kong Escapes, Mechani-Kong's head was modeled by Teizo Toshimitsu and its body by Yasuei Yagi. The suit was constructed from the "hard sponge" material used in bath mats. Initially, there were no protective pads on the shoulders inside the suit, but these were added during shooting. For filming of the climactic scene atop the Tokyo Tower, the protective pads were removed. Two sets of arms, a long pair and a short pair, were constructed and used interchangeably for the suit. Some materials have stated due to the difference in the arm length that two suits were created, but chief modeler Nobuyuki Yasumaru has stated that only one Mechani-Kong suit was made. Mechani-kong's eyes were lit by an 8 milimeter projector lamp. A one-shaku (Japanese foot) Guignol or hand-operated puppet was also used for the Tokyo Tower scene. A life-sized model of Mechani-Kong's right hand was also made to depict the machine grabbing Susan Watson. The remains of Mechani-Kong after it falls to its demise from the Tokyo tower were composed of TV circuit boards and pieces of the Atomic Heat Ray Gun props from Mothra and Type 66 Maser Cannons from The War of the Gargantuas.

Mechani-Kong was a favorite monster of Heisei series special effects director Koichi Kawakita, who worked on the staff for King Kong Escapes. For this reason, Kawakita attempted to bring the character back as Godzilla's opponent for the fourth entry in the Heisei series. The story proposal Micro Super Battle: Godzilla vs. Gigamoth had Mechani-Kong built by the U.S. military and injecting a team of humans inside Godzilla's body, with radiation leaking from the mech spawning the kaiju Gigamoth C Type. Further story proposals built on this premise, featuring Mechani-Kong as a human-built weapon injecting a team of humans inside of Godzilla to battle him from within. However, Toho feared using even the likeness of King Kong would present legal difficulties with Turner Entertainment, who blocked production of a remake of King Kong vs. Godzilla prior.[7] Ultimately Godzilla vs. Mothra was produced in place of Kawakita's Godzilla vs. Mechani-Kong proposals, while some of Kawakita's ideas for Mechani-Kong found their way into Mechagodzilla in the following film. Kawakita later paid tribute to Mechani-Kong through the mechanical monster Bulgario in The Justirisers and Super Fleet Sazer-X the Movie.[7]

In The King Kong Show, Mechani-Kong is a giant robot bearing the basic silhouette of King Kong himself. His body made of sleek brown metal, with his face, hands, and chest being a lighter tan color. Mechani-Kong has no fingers, and his hands are instead composed of two claw-like pieces. In tie-in media for the series, such as manga and other artwork, Mechani-Kong is given completely different designs. Some depict him as being almost completely identical in appearance to Kong, only being green in color and possessing bolts on his body. Others portray him with light tan segments on his joints and midsection, two black squares for eyes and a window on the top of his head, behind which Dr. Who controls the machine.

In King Kong Escapes, Mechani-Kong's entire body is a metallic gray color, with visible bolts on his limbs and joints, and powerful light bulbs for eyes. Mechani-Kong No. 1 has a utility belt containing grenades around his waist. Mechani-Kong No. 2 lacks the utility belt, but has a hypnotic light attached to the sagittal crest atop his head.

In King Kong Escapes, Mechani-Kong was built by Dr. Who based on anatomy drawings of the real King Kong that he had stolen from Carl Nelson.

Mechani-Kong in The King Kong Show

Seeking revenge for a previous defeat, Dr. Who began to destroy New Guinea with Mechani-Kong. The military mistook it for the real King Kong, and went to arrest him on Mondo Island. While discussing the incident with Professor Bond, who looked after Kong with his children, the military received word of another attack on New Guinea, and the Bonds brought Kong to the island nation to help look into the matter. Kong then attempted to attack Mechani-Kong, but Mechani-Kong was unfazed by all of his blows. After Mechani-Kong knocked Kong to the ground, Kong headbutted Mechani-Kong into the ocean, causing him to break down. Dr. Who then had his robot airlifted away with helicopters.

Using anatomy drawings of the legendary giant ape King Kong that he had stolen from Carl Nelson, the international criminal Dr. Who built Mechani-Kong to mine the highly-radioactive Element X from the Arctic. Who intended to sell the element to his mysterious benefactor Madame Piranha, whose country desired to use it to build a nuclear arsenal. When Mechani-Kong began to dig for Element X, the radiation damaged the machine's controls and left it damaged and disabled. Dr. Who was forced to find a new method to mine the material, and kidnapped the real King Kong from his home of Mondo Island. Who outfitted Kong with a mind control device on his head and used Mechani-Kong to try and hypnotize him. However, the radiation emitted by Element X interfered with the control device, and Kong broke free. Kong then escaped Dr. Who's base and began swimming to Tokyo.

Under Dr. Who's orders, Mechani-Kong was hastily repaired and upgraded and designated as Mechani-Kong No. 2 (メカニコング２号,   Mekanikongu Ni-gō).[5] Dr. Who brought the repaired Mechani-Kong to Tokyo aboard his ship, then unleashed the machine in Tokyo to kill Kong. Kong battled his robot double in the streets of Tokyo, but Mechani-Kong grabbed Susan Watson, to whom Kong had taken a liking. Mechani-Kong began climbing up the Tokyo Tower with Susan in hand and Kong in pursuit. Dr. Who broadcast his voice from Mechani-Kong and told Kong to surrender or else he would drop Susan. As the two Kongs scaled the Tower, Madame Piranha turned on Dr. Who and damaged Mechani-Kong's controls, though she was shot and killed in the process. Mechani-Kong became paralyzed and dropped Susan, who was rescued by Jiro Nomura. The top of the Tokyo Tower then snapped, with Mechani-Kong falling to the streets below and exploding into several pieces.

Mechani-Kong can emit a hypnotic light from the top of its head. This light is capable of temporarily entrancing Kong.

Mechani-Kong has a utility built attached to its waist that contains numerous giant grenades. Mechani-Kong can pull these grenades off his belt and throw them, either to try and harm his enemies or to dig through the arctic ice.

Mechani-Kong possesses a high degree of physical strength. The machine is capable of grappling with King Kong himself, considered to be the strongest animal on Earth, and is able to dig through solid ice or scale the Tokyo Tower with ease.

Mechani-Kong's eyes are outfitted with powerful high-beam lights, which it can use to temporarily blind opponents.

Mechani-Kong has several loudspeakers inside its mouth, through which Dr. Who can broadcast his voice. 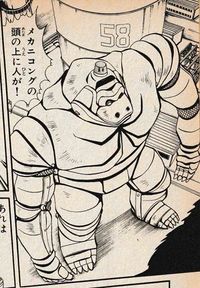 Mechani-Kong II in Godzilla, King of the Monsters

Mechani-Kong appears in the fifth stage of Konami Wai Wai World, called City Stage, as one of the naturally-occurring enemies along side Jumping Hopper, Flyer, and Laserwalker. Later in the level another Mechani-Kong-like mech appears named Bosskonger, who serves as the stage's boss.

This is a list of references for Mechani-Kong. These citations are used to identify the reliable sources on which this article is based. These references appear inside articles in the form of superscript numbers, which look like this: [1]

10 months ago
Score 0
Mecani-Kong you mechanical goliath, I want to see him vs mechagodzilla (heisei)
Permalink
You are ignoring the author of this comment
Show comment | Manage ignore list

10 months ago
Score 0
That would be cool as hell, but doubt it
Permalink
You are ignoring the author of this comment
Show comment | Manage ignore list

Wikizilla was mentioned in this video

35 months ago
Score 0
I wonder how Toho would have handled Mechani-Kong if the Heisei movie that was meant to have him as the antagonist was ever made.
Permalink
You are ignoring the author of this comment
Show comment | Manage ignore list

12 months ago
Score 0
Well, It could have involved criminals Hacking Mechani-Kong's internal software to go insane similarly to Kiryu. But I could be wrong.
Permalink
You are ignoring the author of this comment
Show comment | Manage ignore list

37 months ago
Score 2
Mechani-Kong is such an under-rated villain. His design is great and he looks awesome. The shots of him in the snowy landscape are fantastic.
Permalink
↑ back to top ・ contents
Retrieved from "http://wikizilla.org/w/index.php?title=Mechani-Kong&oldid=158641"
Categories: