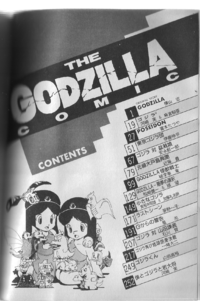 The Godzilla Comic is an anthology comic featuring the work of a vast number of different artists, and 15 original stories. The tales vary from humorous parody to darker themes. The chapters are:

In a comical short by comedian and Monster X Strikes Back: Attack the G8 Summit (among other things) director Minoru Kawasaki, Japanese pop idol Yuki Saito is invited to join the Earth Defense Force, and uses her singing to pacify Godzilla during one of his rampages.

Another satirical take, this time poking fun at the various conference sequences of the Godzilla and other Toho monster films.

In a tale with a clear inspiration from Godzilla vs. Biollante, a human-bonsai creature defends the world from Godzilla. This story is more atmospheric in nature, and Godzilla only appears, in silhouette, in a single panel.

In 1701, Godzilla appears and battles a group of Edo period Japanese samurai.

Created by conceptual artist and suit actor "Hurricane" Ryu, this story depicts Godzilla and other Toho kaiju as humanoid warriors from an alternate reality. Thanks to an advanced human army, they are on the verge of extinction. Godzilla agrees to do battle with them alone, but not before killing Biollante, the traitor who gave the humans the Spirit of the Wood Nymph. Baragon also informs him of a legendary sword, shield, and suit of armor that fell to Earth when the rift between the human and monster realities opened. Godzilla arrives in Japan, swiftly destroys the human's undersea forces, and acquires the armor. A Markalite GYRO launches him into space, but he escapes after it collides with a meteor. He dispatches the humans' space forces, including the Gotengo and Gohten, then takes on the Super X and Super X2 with equal success. Burrowing underground, he seemingly kills the Japanese Prime Minister before rescuing the Wood Nymph. She prepares to close the rift. The Prime Minister takes on Godzilla at the helm of Jet Jaguar, backed up by Mechagodzilla, Moguera, and Mechani-Kong. Their weapons wound him, but just then, the hero's sword and shield emerge from a fissure. Jet Jaguar hops onto a motorcycle as the Prime Minister raves about the need for humans to colonize the monsters' world, so as to replace their own polluted planet. Godzilla finishes all four mechs off with a blast of atomic breath, then returns to his reality, ascending in a beam of light.

In this story Godzilla battles a monster named Gandora, and at the end mutates into a "Super Godzilla" type form.

Written by Ultraman (among other things) director Akio Jissoji, a love story takes a turn when its revealed the object of a cameraman's affection is actually an alien attempting to control Godzilla.

Easily the strangest and most controversial story in the whole book, a martial arts master learns a special killing technique to use against Godzilla. Against all odds the move works and Godzilla is killed, though at the cost of his own life, leaving his pregnant wife a widow. Not long after the child is born, he starts behaving strangely, and he reveals that he is actually Godzilla reincarnated in human form before attacking his mother. The story from there takes a ride through the spirit world.

Another humorous story that's something of a crossover with the author's own Salaryman-style comic character.

Written and illustrated by Daiji Mine, Gigan and King Ghidorah return and Godzilla and Mothra defend the Earth from them.

Dr. Testsuichi Serizawa, the nephew of Dr. Daisuke Serizawa, warns that due to the continued release of Freon gases and other pollutants, the Earth is in peril. Making an appeal to humanity, Serizawa gives a plea on live television showing strange phenomena throughout the world. Mothra appears in the Arctic mid-broadcast. Subsequently, Serizawa and the others are interrupted when Gigan appears in Tokyo and begins a rampage. A wounded Godzilla shows up and engages Gigan, before King Ghidorah appears. King Ghidorah and Gigan nearly kill Godzilla before the water begins to freeze. Using spears of ice, Godzilla retaliates and sends the space monsters fleeing.

It is revealed that Mothra was spraying her threads in Antarctic not to create a cocoon, but to save the planet by restoring the ozone layer with her web. Mothra then dies, as a result of wounds from King Ghidorah and cold. The manga ends with Dr. Serizawa realizing there was an alien conspiracy and warns humanity of this tragic turn of events.

This is a list of references for The Godzilla Comic. These citations are used to identify the reliable sources on which this article is based. These references appear inside articles in the form of superscript numbers, which look like this: [1]

22 months ago
Score 1
This comic is freaking weird! Kids, Shell your eyes!!
Permalink
You are ignoring the author of this comment
Show comment | Manage ignore list

21 months ago
Score 0
No no no no no! How about something more weird than this comic? How ‘bout a human-sized Godzilla interacting with Lucy from Elfen Lied? Or taking the setting of Fist of the North Star and replacing all of the characters with anthropomorphic versions of Godzilla Kaiju (I know “Monster Warrior Godzilla” is like that, but I'm talking about FotNS), or Godzilla vs. Samurai Jack?
Permalink
You are ignoring the author of this comment
Show comment | Manage ignore list

49 months ago
Score 4
This Comic can get extremely weird. The freaking psychic baby that gets possessed... I mean... what the...
Permalink
You are ignoring the author of this comment
Show comment | Manage ignore list

24 months ago
Score 1
I know, an anomorphic Godzilla is sword fighting in space?!?! What is this????
Permalink
↑ back to top ・ contents
Retrieved from "https://wikizilla.org/w/index.php?title=The_Godzilla_Comic&oldid=176117"
Categories: