A brilliant young scientist, Serizawa stumbled upon a deadly chemical reaction while performing studies on the element oxygen. Naming his terrible invention the Oxygen Destroyer, Serizawa hid its existence from everyone except Emiko Yamane, and asked her to keep the invention a secret. However, Emiko was forced to break her promise when Tokyo was devastated by Godzilla and only the Oxygen Destroyer seemed a viable way of stopping him. Together, Emiko and her lover Hideto Ogata convinced Serizawa to use his invention just once to stop Godzilla. Serizawa donned a diving suit and traveled to the bottom of Tokyo Bay with Ogata and activated his device where Godzilla was resting. In order to seal the secret of his dangerous invention forever, Serizawa severed his line and ensured he and his secret would die with Godzilla. The monster was finally destroyed, but only thanks to Serizawa's sacrifice.

Dr. Daisuke Serizawa was a young colleague of paleontologist Kyohei Yamane, in love with his daughter Emiko, who herself had secretly fallen in love with and planned to marry Hideto Ogata. He saw active combat during World War II, and lost his right eye in battle - his eyepatch was worn to cover the empty socket.

After the war, Dr. Serizawa became a scientist who studied elements and their effects on other objects and organisms. During his studies into the element of oxygen, he discovered a destructive chemical reaction that split oxygen atoms into fluids, forcibly removing all oxygen from a body of water and liquefying any organic material present. He was initially horrified by the destructive potential of his "Oxygen Destroyer" but chose to continue researching it, confident that he could take it beyond its raw form and develop it to benefit society. Meanwhile he kept its existence secret from everyone, even Emiko and Ogata.

Shortly after the first sightings of Godzilla, Dr. Serizawa decided to reveal his secret experiments to Emiko when she visited his home, where she intended to break the news that she planned to marry Ogata. After shocking Emiko with the horrific effects of the Oxygen Destroyer, he swore her to secrecy, explaining that he knew that the world was not ready to know of such a terrible weapon. He remained in his lab during much of Godzilla's subsequent attacks on Tokyo, continuing his research, while Emiko was so shocked by what she saw she couldn't bring herself to tell Serizawa about Ogata.

After Godzilla's second raid on Tokyo, Emiko told Ogata about the Oxygen Destroyer, believing it was the only weapon that could stop Godzilla. She traveled to Serizawa's lab with Ogata, hoping to convince Serizawa to use the Oxygen Destroyer against Godzilla. Serizawa adamantly refused, maintaining that his weapon would only begin a new age of terror once the world saw what it could do. He briefly scuffled with Ogata in defense of his decision, but paused when he saw a report about the devastation Godzilla had brought upon Tokyo. Shaken by the utter destruction, Serizawa finally agreed to use his device, but warned Ogata that he would only use it once.

Unbeknownst to Emiko, Serizawa had every intention to make certain that the secret of his ultimate weapon would remain secret. He burned all of his research, assuring Emiko that this was the only way to prevent his secret from falling into the wrong hands. Serizawa and Ogata traveled with a party of scientists and reporters aboard a boat in Tokyo Bay, locating Godzilla on the seabed with a Geiger counter. Serizawa insisted on accompanying Ogata on the dive to activate his device, saying that he had to ensure it was used properly, since it was the only device he had. Ogata agreed, and the two men dove to the ocean floor, where Godzilla was resting. Serizawa activated the Oxygen Destroyer as Ogata was lifted to the surface. As the Oxygen Destroyer reacted with the surrounding water, Serizawa remarked that his invention had worked, and told Ogata and Emiko to be happy together. He then severed his line to ensure that he, and the knowledge of his terrible invention, would die along with Godzilla.

Just a year after Godzilla's defeat, a second Godzilla was sighted on Iwato Island along with another monster called Anguirus. Dr. Yamane was called in by experts in Osaka to discuss possible countermeasures against Godzilla, but said that there was no feasible way to defeat Godzilla following Dr. Serizawa's death.

In 1996, scientist Kensaku Ijuin publicly announced his discovery of Micro-Oxygen, a miniaturized oxygen atom with many potential uses that could benefit mankind. Reporter Yukari Yamane, granddaughter of Kyohei Yamane, was contacted by her aunt Emiko, who warned her that Ijuin's invention seemed dangerously similar to Dr. Serizawa's Oxygen Destroyer, for which he gave up his life to prevent its future use. She asked her niece to convince Ijuin to shelve his project to prevent the Oxygen Destroyer from ever being recreated. Yukari met with Ijuin to discuss the similarities between Micro-Oxygen and the Oxygen Destroyer, and Ijuin admitted that he had made reference to Serizawa's surviving work when developing it. However, he was adamant that while it could be used as a weapon in the wrong hands, Micro-Oxygen was developed strictly to benefit mankind. Later, Yukari's brother Kenichi approached Ijuin to ask him to recreate the Oxygen Destroyer, believing it was the only way to kill Godzilla before his impending meltdown destroyed the world. However, Ijuin revealed that the full destructive power of Micro-Oxygen had already been unleashed, as construction of the Tokyo Bay Aqua-Line had drawn a colony of Precambrian crustaceans mutated by the Oxygen Destroyer in 1954 to the surface.

In 1954, Godzilla was killed using an experimental chemical weapon, the inventor of which subsequently died. To prevent the JSDF from facing ridicule and appearing incapable of defending Japan, the Japanese government covered up the weapon's use and gave the JSDF credit for killing Godzilla. This decision would come to haunt them 50 years later, when Godzilla returned and the JSDF proved completely unable to stop him.

After a second Godzilla appeared in Tateyama in 1999, Japanese Prime Minister Machiko Tsuge met with Minister of Science and Technology Hayato Igarashi to discuss the disaster. They recalled that the original Godzilla had been killed back in 1954 by the Oxygen Destroyer, a chemical weapon invented by Daisuke Serizawa. However, Serizawa had taken his own life to prevent knowledge of his invention from ever falling into the wrong hands again.

Young Serizawa awakened to find himself shipwrecked on a strange island. When he ventured into the jungle, he was terrified as he witnessed Anguirus, Gorosaurus, and Baragon congregate. He ran away when Godzilla-kun approached him, only to run into Little and Minilla. The Three Godzilla Brothers finally stopped Young Serizawa and introduced themselves, demonstrating that they meant no harm. Serizawa asked if they were dinosaurs, to which Godzilla-kun replied that they were kaiju. Minilla offered Serizawa a banana, which he accepted and ate. The Three Godzilla Brothers then began building a house for Serizawa out of logs. Together, they moved Serizawa's scientific supplies into his new home. As Minilla carried Serizawa's invention the Oxygen Destroyer, he nearly dropped it only for Little to catch it. The Oxygen Destroyer was then placed against a wall in Serizawa's house. Serizawa thanked the Three Godzilla Brothers and prepared to begin a new life on the island.

In the story Godzilla's Resumed Earth Defense Battle, Serizawa's nephew Testsuichi warns humanity of the environmental catastrophe facing the planet. Daisuke himself is shown in a brief flashback to his deployment of the Oxygen Destroyer against Godzilla.

At the end of the first issue, a powerful chemical weapon was deployed against Godzilla in Tokyo Bay. The unnamed inventor, heavily implied to be Serizawa, destroyed his blueprints before committing suicide as the weapon activated. Godzilla's fate was left ambiguous; either he survived or another monster of the same species appeared several months later.

Godzilla 2: War of the Monsters

Dr. Serizawa is one of three scientists the player can consult. This version of the character lacks his signature eyepatch. 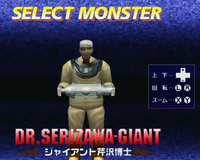 Dr. Serizawa-Giant (ジャイアント芹沢博士,   Jaianto Serizawa Hakase, lit. Giant Dr. Serizawa) is the most difficult character to unlock, as the player must first complete the game with Godzilla, Godzilla 1st, Godzilla-USA, and Minilla. He has two attacks: a laser cannon that extends from his eyepatch and the Oxygen Destroyer, which unleashes lightning in every direction when he holds it above his head. He can recover health by kneeling, causing a ray of light to appear above him.

In the tutorial level, the G-Force Operator states that Godzilla was only driven away from Japan back in 1954 because of "Dr. Serizawa's sacrifice."

Some how I didn't have this page watched until now...

19 months ago
Score 1
Certainly.
Permalink
↑ back to top ・ contents
Retrieved from "http://wikizilla.org/w/index.php?title=Daisuke_Serizawa&oldid=174429"
Categories: