In ancient times, the Gappas would fight other monsters for survival. They were already present when the Earth was still an interstellar cloud, suggesting that the Gappas originated in outer space.[1]

All three of the Gappas share common characteristics, being based on various reptiles and birds, such as eagles and hawks. Overall, they resemble enormous bipedal Griffins. As exhibited in the two adults seen in the film, the species is sexually dimorphic. The female has a smaller head crest and has a flatter face compared to her mate. Their scales are triangle-shaped, and their eyelids are reverse to that of humans. Gappas' wings are unlike those of birds; they are actually evolved ribs.[1]

An expedition to Obelisk Island by Mr. Funazu uncovers a baby monster, who hatches from an egg near a sacred temple. The natives plead with the skeptical scientists not to take the baby away, lest it anger the baby's parents. Sure enough, they take the baby away, and soon, inside the caverns, its two parents rise from the underground waters beneath the volcano, destroying everything in their path. Saki, the only survivor, is rescued by an American navy fleet and brought back to Japan.

The parents storm across Japan, destroying all in their wake, but their assault ceases once they recover their child. Mercifully, they relent, and depart to return to Obelisk Island. 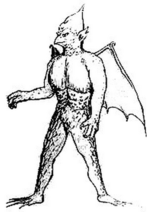 This is a list of references for Gappa. These citations are used to identify the reliable sources on which this article is based. These references appear inside articles in the form of superscript numbers, which look like this: [1]

one month ago
Score 0
When Gamera and other kaiju mated and then boom , Gappa was born
Permalink
You are ignoring the author of this comment
Show comment | Manage ignore list

17 months ago
Score 0
Are they inspired by the Kappa? They look pretty similar. (FYI: Kappa are water monsters of Japanese folklore)
Permalink
You are ignoring the author of this comment
Show comment | Manage ignore list

51 months ago
Score 1
They are very cool, but they are really really really underrated. :(
Permalink
You are ignoring the author of this comment
Show comment | Manage ignore list

20 days ago
Score 0
I think so too
Permalink
↑ back to top ・ contents
Retrieved from "https://wikizilla.org/w/index.php?title=Gappa&oldid=174162"
Categories: