Do not confuse with LittleGodzilla, who is also referred to as "Chibi Godzilla" in the Japanese dialogue in Godzilla vs. SpaceGodzilla.

Chibi Godzilla (ちびゴジラ,   Chibi Gojira) is a juvenile kaiju who first appeared in the 2018 children's book Do Your Best, Chibi Godzilla. Chibi Godzilla is the star of a series of Godzilla media aimed toward very young children, telling the story of Godzilla as a child before he grew up to become the King of the Monsters. So far Chibi Godzilla has appeared in two picture books, two theater promos, a web anime series, and a music video, while a third book and a wide variety of other media featuring the character is planned.

Chibi Godzilla's name simply comes from placing chibi (ちび), a Japanese word meaning "little," in front of Godzilla's name. Rather than being translated to English as "Little Godzilla," the character's name is consistently written in English as Chibi Godzilla. His name is sometimes shortened to just ChibiGodzi (ちびゴジ,   Chibigoji).

Chibi Godzilla is a stylized and simplified version of Godzilla's traditional design. He has a large head with no defined neck, a round body, and round hands with no visible fingers. He has three white claws on each foot. There is a row of short, white maple leaf-shaped dorsal plates running down Chibi Godzilla's back to his tail, which is very stubby and suspended in the air. Chibi Godzilla's skin is light green, but his muzzle is white with two visible nostrils. He has large circular eyes which are white with big black pupils.

Chibi Godzilla is described as a "crybaby," in stark contrast to Godzilla's reputation of being fierce as strong as an adult. He is stated to be friends with Chibi Ghidorah and Chibi Rodan.

Do Your Best, Chibi Godzilla

Chibi Godzilla had a propensity to cry whenever he tripped and fell, bumped into things, read a sad story, or came in last in a footrace with Chibi Ghidorah and Chibi Rodan. While he was a bit of a crybaby, Chibi Godzilla breathed fire any time he cried, impressing his friends. As such, Chibi Godzilla considered himself strong and healthy despite his reputation as a crybaby.

One day, Chibi Godzilla was lonely and went to look for friends. He saw Chibi Mothra, whose wings sparkled with light, Chibi Anguirus, whose back was covered in prickly spikes, Chibi Ghidorah, who was very good at singing, and Chibi Rodan, who could fly through the sky. When asked to show what he could do, Chibi Godzilla replied that he could breathe fire and spewed a blast of fire at the other monsters, causing them to flee. Chibi Godzilla ran after them, begging them not to go, with his fire breath striking a nearby fruit tree and causing all of the fruits to fall from it. Chibi Godzilla enthusiastically began eating the fruit, then offered to share it with the other monsters. The monsters ate the fruit together until their bellies were full. Finally, Chibi Godzilla had friends of his own and was not lonely anymore. 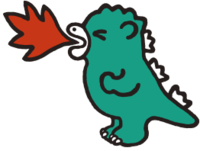 Chibi Godzilla can exhale a blast of orange fire from his mouth. He tends to breathe fire whenever he cries.

2 months ago
Score 0
Still cute though.
Permalink
↑ back to top ・ contents
Retrieved from "https://wikizilla.org/w/index.php?title=Chibi_Godzilla&oldid=171027"
Categories: