Creations of the mad genius Malic, the Bat Men served as guardians of his base on Blood Rock. Malic used the Bat Men to hold Dr. Okada and his daughter Tsuruko hostage with the intention of drawing his nemesis Craig McKenzie to the island. The Bat Men held Okada and Tsuruko still and forced them to watch Malic perform the gruesome surgery to create the Griffon. When McKenzie and his allies breached Malic's lab, he ordered the Bat Men to attack them, though McKenzie and the others were able to kill them all. An individual Bat Man appeared in an episode of the 1973 television series Go! Godman as an enemy of the titular hero.

The Bat Men are given a multitude of different Japanese names across several publications, including Human Bats (人間コウモリ,   Ningen Kōmori), Bat Humans (コウモリ人間,   Kōmori Ningen), and Bat People (コウモリ人,   Kōmori Jin). Additionally, the Bat Man which appeared in Go! Godman had its name written fully in katakana, as Batto Man (バットマン). Although rarely given English names, the 2005 Japanese book Godzilla Toho Giant Monster Pictorial Book confirms their English names as "Bat Men". Merchandise of the creatures was also later released in 2008, giving them a peculiar alternate name of Blood Rock Keepers, referencing their protection of Blood Rock within the film.

Two Bat Men suits were made for Latitude Zero, though the film used editing and compositing to create the effect of five different Bat Men. The heads of the suits were modeled by Teizo Toshimitsu, while their bodies were modeled by Yasuei Yagi. The Bat Men suits were worn at different points by Haruo Nakajima, Haruyoshi Nakamura, Hiroshi Sekita, and Susumu Utsumi.[3] One of the Bat Man suits was modified by Tsuburaya Productions and used to portray the kaiju Alien Mechara in the show Chibira-kun,[4] while the other was used to portray Bat Man in Go! Godman

All of the Bat Men are the nearly identical in appearance, all looking like giant bipedal bats. Some have large pointed ears, while others possess smaller, curved ears.

The Bat Men are creations of Malic, and are most likely normal humans that were transformed into their current forms by Malic's twisted experiments, since Malic also threatens to turn Tsuruko Okada into a similar creature.

The Bat Men were among Malic's many terrible creations, and were used to guard his fortress on Blood Rock. When Malic abducted Dr. Okada and his daughter Tsuruko, he used the Bat Men to guard them, and later made them force his captives watch as he performed the surgery to create the Griffon. When Captain McKenzie and his crew breached Malic's lab, Malic ordered the Bat Men to attack them as he escaped. Using their various glove-mounted weapons, McKenzie and his crew were able to defeat the Bat Men and rescue Okada and his daughter.

"Godman vs. Bat Man and Kappalge" 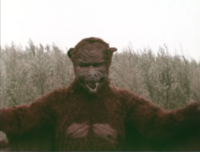 A creature called Bat Man (バットマン,   Batto Man) later appeared in the mini-series, Go! Godman, and was portrayed with a reused Bat Man suit. Not only was it capable of flight, but the monster could also summon invisible explosives and alter its size. These abilities proved to be a hassle for Godman, but he eventually came out victorious.

This is a list of references for Bat Men. These citations are used to identify the reliable sources on which this article is based. These references appear inside articles in the form of superscript numbers, which look like this: [1]

↑ back to top ・ contents
Retrieved from "http://wikizilla.org/w/index.php?title=Bat_Men&oldid=157156"
Categories: