Snowman (雪男,   Yuki Otoko) is a yeti kaiju who appeared in the 1955 Toho film, Half Human.

This creature's Japanese name translates to "Snowman," which is his official English name. Snowman is also referred to as a Yeti or the Abominable Snowman, while the book Encyclopedia of Godzilla (Mechagodzilla Edition) gives him the name Half Human, the English title of the film in which he appeared.

Snowman was designed with inspiration from various types of ape in order to give his design an aspect of realism. Eiji Tsuburaya prided himself on Snowman's design being "not just to be scary." Snowman was initially modeled by Fuminori Ohashi,[5] who designed the suit's feet to be set on large clogs to increase its height, though this was scrapped due to the potential danger. Snowman's face was remodeled several times, but after about six months the face modeled by chief modeler Teizo Toshimitsu was adopted and the torso was remodeled by the Yagi brothers Kanju and Yasuei. Ohashi's face for Snowman was characterized by its ferocious look with its fangs exposed, whereas Toshimitsu's opted for a more gentle look. In addition, a suit consisting only of Snowman's lower body was also made.[6] 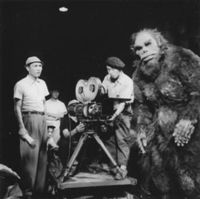 The Snowman suit on set

The suit's body was covered in goat hair. The face was a life mask of suit actor Sanshiro Sagara. There are conflicting reports as to whether Sagara was simply modeler Fuminori Ohashi, as this was a pseudonym of his, or a different person entirely. Toho advertised that Sagara was chosen from a nationwide contest to provide the face for Snowman,[7] while fellow modeler Eizo Kaimai attested that Ohashi was the suit actor for Snowman in addition to his original modeler.[5] Additionaly, a photograph exists of Ohashi in the Snowman suit with the mask off.

Half Human was shot on location in the Japanese Alps.[7] Initially, a child was used as a stand-in for actress Momoko Kochi when the Snowman was holding her character in order to make the monster appear larger, but the difference between the physique of Kochi and the stand-in was too obvious and this was scrapped. Tsuburaya also experimented with stop-motion animation for Snowman using outdoor time-lapse photography, though this too went unused as the moving shadows of surrounding trees were not accounted for.

At the time the film was released, publicity photos were taken of Snowman with the Godzilla suit from Godzilla Raids Again, with the caption "Snowman is stronger than Godzilla."[8]

Snowman has an extremely muscular body and is able to lift a woman and run extremely fast without trouble. The creature has a humanoid face along with human body features, such as opposable thumbs. Snowman is significantly taller than humans, and has shaggy fur all over its body.

The Snowman's exact origins are unknown, but it is presumed to be a type of large ape that has lived for centuries high in the Japanese Alps. Though only a single adult Snowman and its offspring are living during the events of the film, the skeletal remains of several other members of their kind are found in a cave. The characters speculate that the entire Snowman population was killed by consuming a type of poisonous mushroom found in their habitat, leaving only two individuals alive.

The Snowman is first seen looking into a tent window while explorers are sleeping in it, and he caresses a female explorer's face. His curiosity is cut short when she wakes up and screams, causing him to run into the forest. It is revealed that villagers worship the Snowman as a deity. The next scene with him in it shows him carrying a deer carcass, when he hears a scream, and goes to help a human, also a member of that explorer party, that almost fell off a cliff. Later, an animal broker, thanks to information from a village girl, discovers the location of the monster's cave and figures that he can catch the monster by using its offspring as bait. The hunter captures the Snowman, but accidentally lets the child escape. He ends up killing the baby and the adult Snowman breaks out of its cage. He kills the hunter and returns to his cave. Later, he captures the same female explorer he saw earlier and brings her to his mountain cave, where he is shot by the explorer team and falls into a pit of sulfuric acid along with the village girl.

Snowman's only ability is superhuman strength, it can lift humans and smash down structures with ease. After its young was killed by a circus attempting to capture the creature, Snowman goes berserk and attacks everything in sight, killing many people and destroying the entire circus ground. It then kidnapped the female lead and escaped into the mountains, carrying her with one hand. 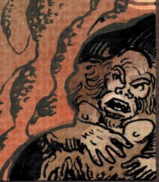 Snowman in Godzilla: Rage Across Time #1

Snowman makes a brief appearance looking out from a cave in the first issue of Godzilla: Rage Across Time as Akio and Gorou Suda approach the Shobijin temple.

This is a list of references for Snowman. These citations are used to identify the reliable sources on which this article is based. These references appear inside articles in the form of superscript numbers, which look like this: [1]

Showing 16 comments. When commenting, please remain respectful of other users, stay on topic, and avoid role-playing and excessive punctuation. Comments which violate these guidelines may be removed by administrators.

↑ back to top ・ contents
Retrieved from "http://wikizilla.org/w/index.php?title=Snowman&oldid=156304"
Categories: