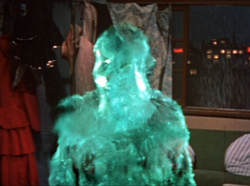 The H-Man, an example of a kaijin

Kaijin (怪人) is a Japanese word that literally means "mysterious person." In Japanese, kaijin is a relatively broad term that encompasses any fictional human-like character that possesses strange supernatural abilities, and is usually used to refer to villains. Kaijin has no true equivalent in English, but possible approximations include "supervillain," "superhuman," "mutant" or simply "monster." The word kaijin is closely related to "kaiju," a Japanese word that is also usually translated as "monster" and is often used by English-speakers to refer to powerful giant creatures such as Godzilla. Unlike kaiju, kaijin are usually human-sized and humanoid in appearance, but possess monstrous traits or abilities. Outside of Japan, kaijin is often used to refer to human-like or human-sized kaiju featured in Japanese media, such as the titular characters from Toho's Transforming Human Series films; The H-Man, The Secret of the Telegian and The Human Vapor.