The Human Vapor (ガス人間㐧1号,   Gasu Ningen Daiichigō, lit. The First Gas Man)[note 1] is a 1960 tokusatsu film produced by Toho. It is considered to be the third film in Toho's Transforming Human Series, after The H-Man and The Secret of the Telegian. The film was released to Japanese theaters on December 11, 1960, and to American theaters on May 20, 1964.

The film tells the story of Mizuno, a librarian who has been given the ability to become vapor after a scientist performs an experiment on him. Mizuno uses this power to engage in criminal activities, robbing banks to give the money to his love interest, the dancer Fujichiyo. Police Lieutenant Kenji Okamoto and his reporter girlfriend Kyoko (Keiko Sata) work together to solve the criminal case and attempt to bring things to a peaceful conclusion. 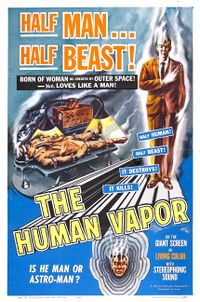 The Human Vapor was released theatrically in the United States in 1964 by Brenco Pictures Corporation. It was later re-released in a double-bill with Gorath in 1969. The American version re-structured the film from a mystery story to a narrative focused around Mizuno told from his point of view. Approximately eleven minutes of footage was cut, while a portion of Kunio Miyauchi's score was replaced with stock music, primarily from Paul Sawtell's score for The Fly. Eventually, the rights to the film in the U.S. were acquired by Metro-Goldwyn-Mayer, who released it on VHS throughout the 1980's and 1990's. The film is currently unavailable on DVD or Blu-ray in the United States, though it occasionally airs on Comet TV.

Toho produced a stage adaptation of The Human Vapor in October 2009, with a cast that included Kumi Mizuno.[1] No recording of the show has surfaced, although it was broadcast on NHK on February 26, 2010.[2]

After The Human Vapor proved a box office success in both Japan and the United States, producer Tomoyuki Tanaka began to plan for a sequel entitled Frankenstein vs. The Human Vapor. The sequel's premise would revolve around Mizuno, having actually survived the film's climax, seeking out Frankenstein's monster in order to find the secret of his immortality and use it to revive his love interest, who perished in the climax. However the film never came to pass, although Frankenstein's monster would later appear in Toho's Frankenstein vs. Baragon in 1965.

This is a list of references for The Human Vapor. These citations are used to identify the reliable sources on which this article is based. These references appear inside articles in the form of superscript numbers, which look like this: [1]


↑ back to top ・ contents
Retrieved from "https://wikizilla.org/w/index.php?title=The_Human_Vapor&oldid=178976"
Categories: