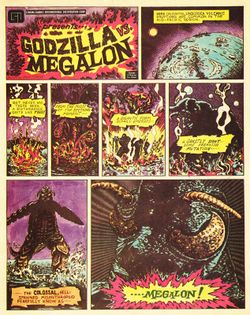 Godzilla vs. Megalon is a promotional comic by Cinema Shares International Distribution Corporation.

This short, four page, single-volume promotional comic was produced by Cinema Shares International Distribution Corporation and was issued in 1976, to coincide with the release of Godzilla vs. Megalon in American cinemas later that year. Although the comic's plot roughly follows that of the film, there are several significant differences present. The story is credited to R.J. Wilson and the art was done by "Swiftspear."

Megalon appears during an undersea eruption and attacks an unnamed city. Meanwhile, Godzilla learns of this and calls on Robotman to come and help him, then travels to fight Megalon, who now has partnered with Borodan. Megalon, Borodan and Godzilla fight, and then Robotman arrives to help. Ultimately, Borodan is defeated after Robotman picks him up and drops him from a great height, and Megalon suffers a painful death after Godzilla bites into the back of his neck.

Differences between the movie and the comic.

↑ back to top ・ contents
Retrieved from "http://wikizilla.org/w/index.php?title=Godzilla_vs._Megalon_(comic)&oldid=158644"
Categories: