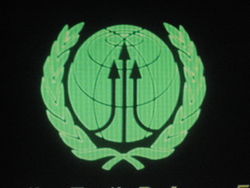 The Earth Defense Force (地球防衛軍,   Chikyū Bōeigun) is a military organization formed by the United Nations to protect humanity from monster activity that first appeared in the movie The Mysterians.

The Japanese name of this organization, Chikyū Bōeigun, literally translates to "Earth Defense Force," however this English name is only used for it in Godzilla: Final Wars and in video games. In these media, its name is also abbreviated as EDF. In The Mysterians, its name is rendered on a sign in English as Defence Force of the Earth. In Godzilla: Unleashed, the organization is called the Global Defense Force, or GDF for short.

In the wake of Godzilla's first appearance in 1954, the nations of the world formed the Earth Defense Force to combat him and the many other monsters that appeared around the globe over the following decades. The core of the EDF's forces was the M Organization, an elite team of humans possessing special abilities, known as Mutants. While the EDF was able to overcome most of the monsters it faced, it could never defeat Godzilla himself. Finally, Godzilla was lured to Antarctica for a final showdown with the EDF's flagship warship, the Gotengo. Godzilla knocked the Gotengo out of the sky with his atomic breath, but crewmember Douglas Gordon fired a volley of missiles that caused Godzilla to fall into a fissure and become buried under an avalanche of ice. Godzilla was successfully trapped under the Antarctic ice, and a facility called Area G was constructed around him.

By the year 20XX, Gordon was now the captain of the refurbished New Gotengo, and led the ship into battle in the English Channel against the giant serpentine monster Manda. The Gotengo destroyed its foe, but due to Gordon's recklessness the ship was nearly destroyed. Gordon was court-martialed and locked in a cell after striking his superior officer during a hearing. M Organization member Shinichi Ozaki was ordered to serve as a bodyguard for Miyuki Otonashi, a United Nations scientist working to study a strange mummified creature discovered in Hokkaido. During this time, monsters began appearing all over the globe unexpectedly. The EDF used all of its might to fight back, but could not stand against the huge onslaught of monsters. Suddenly, all of the monsters were mysteriously teleported away. A group of extraterrestrials known as the Xiliens revealed themselves to the people of Earth, claiming to have gotten rid of the monsters and intending to save the human race from further calamity. Ozaki and Otonashi gradually came to realize that the Xiliens' intentions were not as noble as they seemed, as they had been abducting key government officials, including the Secretary General of the U.N. and two of the highest-ranking members of the EDF, and replacing them with Xilien impostors. Ozaki freed Gordon, knowing he wasn't compromised, and with the aid of him, Miyuki and her sister Anna exposed the Xiliens' true colors on national television. The Xiliens' commander tried to explain himself, but was shot and killed by his subordinate, who now proclaimed himself as the Xiliens' leader, the Controller of Planet X. The Controller used his powers to take control of several EDF mutant soldiers, then forced them to attack Ozaki and his allies. They managed to escape the ambush, but soon found the EDF's forces being decimated after the Xiliens re-deployed all of the monsters and used their advanced weapons to level Earth's major cities.

With the human race already doomed to become the Xiliens' cattle, Gordon organized the remnants of the EDF for one final mission: Operation: Final War. They would use the Gotengo to free Godzilla from Area G and lead him across the globe, allowing him to defeat all of the Xiliens' monsters one by one. After that, the Gotengo would assault the Xilien Mothership and put an end to their invasion. Gordon also promised that after the mission was over, he would lock Godzilla back up again. The plan was put into motion, but the Controller sent the mummified monster discovered earlier, actually a cyborg known as Gigan, to stop them. The Gotengo freed Godzilla, and he promptly defeated Gigan. The Gotengo led Godzilla across the globe, where he fought and defeated each one of the Xiliens' monster pawns. Finally, Godzilla and the Gotengo reached Tokyo, where the Xiliens' remaining strength was marshaled. The Controller sent the rebuilt Gigan and a mysterious new monster called Monster X to deal with Godzilla, while the Xilien Fighters engaged in a dogfight with the Gotengo. The Gotengo breached the Mothership's hull, but the Controllers' men boarded the ship and killed all of its crew except Gordon, Ozaki, Miyuki, and Major Komuro. The Controller had his prisoners brought before him, then explained that both he and Ozaki were special individuals known as Keizer, the result of ancient interbreeding between the humans and Xiliens. The Controller took control of Ozaki and made him fight his allies, but Miyuki freed him from this control using a sacred dagger given her by Mothra's Shobijin. Ozaki began to fight the Controller, while his allies freed the Xiliens' prisoners, whom they had replaced with their impostors on Earth, and fought their way back to the Gotengo. Ozaki defeated the Controller, who commanded the Mothership to self-destruct. Ozaki ran back to the Gotengo, and the ship fled before the Mothership exploded.

Even though the Xiliens were eradicated, Monster X had transformed into the more-powerful Keizer Ghidorah and was close to killing Godzilla. Ozaki used the Gotengo's cannon to transfer his Keizer energy into Godzilla, allowing him to gain the upper hand and destroy Keizer Ghidorah. However, still vengeful for what humanity had done to him long ago, Godzilla shot down the Gotengo with his atomic breath. The crew exited the ship and aimed their weapons at Godzilla, who was prepared to destroy them once and for all. However, Godzilla's son Minilla ran in front of Godzilla and held out his arms, begging his father to let go of his hatred and walk away. Godzilla relented, and turned around to return to the sea with Minilla following after him. The EDF had succeeded, they brought humanity back from the brink of extinction and thwarted the Xiliens' invasion. And its sworn enemy, Godzilla, was seemingly no longer an enemy.

The Earth Defense Force, under the name Global Defense Force, appears in the 2007 Atari/Pipeworks game Godzilla: Unleashed for the PlayStation 2 and Wii. In this game, the GDF is one of four monster factions, the others being Earth Defenders, Aliens, and Mutants. The GDF's monsters are all mecha units, and include Kiryu, Mechagodzilla 2, MOGUERA, Mecha-King Ghidorah, and Jet Jaguar. Their goal is to defend cities from attacking monsters and root out the crystal infestation. The GDF's conventional military units also assist their mechas in the game, and will attack any monsters not aligned with them that are causing destruction. The GDF mechas are all autonomous and run by computerized brains, so they are susceptible to the corrupting effects of the crystals and may turn against their allies. If the player completes the campaign as a GDF monster, the ending will state that the crystal incursion has been stopped and the Earth is safe once again, thanks to both the player's monsters and the Earth Defender monsters.

The player, acting as a Commander, General Tywin, and Operator Yui represent the Earth Defense Force, fighting against the Xiliens and their horde of mind-controlled monsters. Together, the organization erects defensive measures in Tokyo, London, Sydney, Arizona, and New York City. Citizens rescued from the cities are sent to colonize the Moon, in the event that the planet becomes uninhabitable. The EDF also finds allies in several of the Earth's previous villains and heroes, such as the Shobijin, Kilaaks, Minilla, and more.

↑ back to top ・ contents
Retrieved from "http://wikizilla.org/w/index.php?title=Earth_Defense_Force&oldid=155872"
Categories: