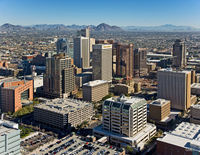 The capitol of Arizona, Phoenix

Arizona is a state in the Southwestern United States. It has been visited by kaiju multiple times in Godzilla comics, as well as in the films Godzilla: Final Wars and Godzilla: King of the Monsters.

When the Xiliens launched their first wave of worldwide kaiju attacks in secret, they dispatched Kumonga to the Arizona desert near Monument Valley, where he smashed a trailer with a single leg.

King Ghidorah's call awakened Scylla from her slumber beneath Monarch Outpost 55, an oilfield in Sedona, Arizona. Like the other Titans around the world, Scylla rampaged through populated areas, destroying buildings in nearby Phoenix with her colossal legs.

In issues #10 and #11, Godzilla and Red Ronin battle Yetrigar in the Grand Canyon.

In issue #2, Kumonga crosses the Mexico–United States border into Nogales, Arizona, where he ensnares a Border Patrol Jeep in his webbing.

In issue #1, the Cryogs watch Gigan battle Kumonga in the Grand Canyon, where the spider now resides. Though quickly covered in webbing, the cyborg is victorious, slicing off one of Kumonga's legs with his chest saw before burning the webbing with his eye laser. Satisfied with his performance, the Cryogs enlist him in their world-conquering plans, and prepare to upgrade his weaponry.

Arizona is the fourth location to be attacked by the invading Xiliens, who are repelled by the Earth Defense Force. They deploy hordes of giant owls, bats and vultures, along with the kaiju Kumonga ('04), Hedorah ('04), Rodan ('04), Mechagodzilla 2, Burning Godzilla, Mothra Leo, SpaceGodzilla, Mothra ('01), Monster X, Godzilla ('03), Keizer Ghidorah, Modified Gigan, Titanosaurus, Baragon ('01), Godzilla ('04), and Ganimes.

3 months ago
Score 0
https://www....=uYGjhytvinI
Permalink
↑ back to top ・ contents
Retrieved from "http://wikizilla.org/w/index.php?title=Arizona&oldid=162073"
Categories: