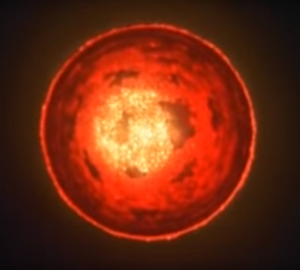 Planet R (R星,   Aru Boshi, lit. R Star) is a rogue planet discovered by the Pairans in the 1956 Daiei film, Warning from Space.

Planet R was discovered by the Pairans on a collision course with Earth. They knew that they needed to warn humans and tell them how to deflect the planet, but worried about how humans would react to finding that aliens really existed. After some time, Ginko, who was revealed to be an alien because of her superhuman traits and the ability to understand a formula for a nuclear weapon, told humans about the incoming threat. They appeal to the World Congress about the situation but are rejected. Not much after, the World Congress considered it real and a threat, they launch nuclear weapons at the rogue planet with hope to destroy it, but the missiles were proven ineffective. Earth's atmosphere heats up and Ginko comes back to see that Planet R wasn't destroyed. Pairans use their technology to locate Matsuda, who was wearing a Pairan ring and gather the formula. Pairans then create a nuclear weapon of their own and destroy the rogue planet, saving the Earth.


↑ back to top ・ contents
Retrieved from "http://wikizilla.org/w/index.php?title=Planet_R&oldid=140814"
Categories: