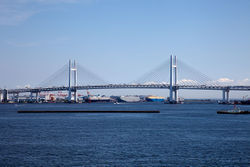 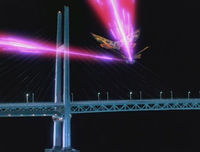 Mothra and Battra fly over the Yokohama Bay Bridge in Godzilla vs. Mothra

Yokohama Bay Bridge collapsing after being hit by Battra's prism beams in Godzilla vs. Mothra

After Mothra emerged from her cocoon on the National Diet Building in her imago form, she flew to Yokohama to confront and destroy her dark counterpart, Battra, who had also transformed into his imago form. The two giant moths flew over the city of Yokohama, blasting each other with laser beams. Mothra flew over the Yohohama Bay Bridge to evade Battra's prism beams, which struck and damaged the bridge instead.

When Godzilla was blasted into Tokyo Bay by King Ghidorah, Yuri Tachibana and her boyfriend Teruaki Takeda ran onto the Yokohama Bay Bridge to film the monsters' underwater battle below. However, a stray blast of Godzilla's atomic breath struck the bridge's supports, causing it to collapse into the bay below. Thankfully, a sacred stone Yuri was carrying sank to the sea floor and re-energized King Ghidorah, allowing him to surface and battle Godzilla again.


↑ back to top ・ contents
Retrieved from "http://wikizilla.org/w/index.php?title=Yokohama_Bay_Bridge&oldid=155864"
Categories: