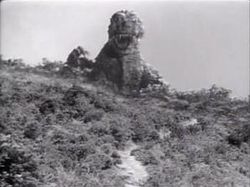 Odo Island (大戸島,   Ōdo Shima) is a small populated fictional island near Japan, possibly a part of the Bonin Islands. It is the location where Godzilla was first sighted in the 1954 film, Godzilla.

One day, a raft containing survivors of a shipwreck washed up on Odo Island. One of the survivors was Masaji Yamada, a native of the island, who claimed that a huge monster destroyed their boat. One of the village elders concluded that the monster in question was Godzilla, a legendary sea monster from the island's folklore. When a group of reporters from the Japanese mainland arrived to investigate, the elder explained that Godzilla will rise from the sea to feed on humanity. In the past when fishing was poor, he said, the villagers used to tie girls to rafts and float them out to sea as a sacrifice to Godzilla. A traditional exorcism ceremony was held on the island that night, all that remained of the island's mythological traditions. Later that night, a powerful storm struck the island. Masaji Yamada's house was destroyed by some massive force, leaving his younger brother Shinkichi alone. Following the devastation, a group of witnesses from the island traveled to Tokyo to speak at the National Diet Building. Shinkichi testified that he saw a gigantic monster destroy the buildings on the island, while other witnesses claimed that the damage on the island looked like something had crushed various buildings from above. Paleontologist Kyohei Yamane agreed to form a scientific expedition to the island to investigate.

On the island, Yamane's team detected large levels of radiation on one side of the island. They also discovered a huge radioactive depression on the ground, in which Yamane discovered a perfectly preserved Trilobite. Suddenly, a lookout on the island began to ring a bell, announcing that Godzilla had been seen on the other side of the island. Everyone ran to a hill on the island, where they were all confronted with the 50-meter reptilian beast himself. Godzilla roared at the crowd, causing them to flee in terror. Godzilla then walked back to the ocean and swam away.

Professor Hayashida made a passing mention of Godzilla's status as a legendary creature on Odo Island and the astonishment of its residents at the time of Godzilla's first appearance thirty years prior during a conversation with Goro Maki, Hiroshi Okumura, and Naoko.

Photographs from the aftermath of Godzilla's rampage on Odo Island were placed on display at a residence on Magonoté Island.

Zoologist Goro Maki hailed from Odo Island. After discovering an evolving mutated creature living in the ocean, Maki gave it the name "Godzilla," which translated to "Incarnation of God" on the island.

In 2030, the corpse of Kamoebas IV washed ashore on Odo Island. Biologist Kyohei Yamane led an investigation into the carcass and determined it was killed by a larger and more powerful monster, which he named "Godzilla" after a dragon from the island's mythology.[1]

This is a list of references for Odo Island. These citations are used to identify the reliable sources on which this article is based. These references appear inside articles in the form of superscript numbers, which look like this: [1]