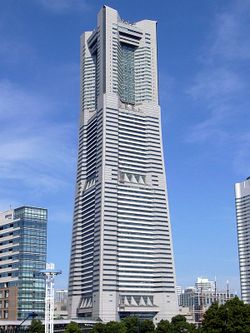 Yokohama Landmark Tower (横浜ランドマークタワー,   Yokohama Randomāku Tawā) is a skyscraper located in the Minato Mirai 21 district of Yokohama, Japan. It is the second tallest building in Japan, standing at 296.3 meters (972 feet) high. It is featured in the 1992 and 2001 Godzilla films, Godzilla vs. Mothra and Godzilla, Mothra and King Ghidorah: Giant Monsters All-Out Attack. 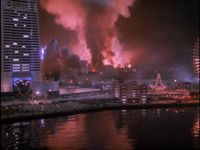 Godzilla walks past the Yokohama Landmark Tower in Godzilla vs. Mothra

Upon arriving in the Minato Mirai 21 district of Yokohama, where Mothra and Battra were battling, Godzilla walked past the Landmark Tower. When Battra attacked Godzilla, he used his prism beams to collapse the Landmark Tower onto Godzilla. As Battra approached the rubble, Godzilla broke free and grabbed Battra before tossing him away.

As Godzilla rampaged through Yokohama, the guardian monster Mothra arrived and landed atop the Landmark Tower. The giant insect challenged Godzilla, and the two monsters began to battle. After Mothra hit Godzilla with her clusters of explosive stingers, Godzilla retaliated by firing his atomic breath. Mothra flew over the Landmark Tower to escape the beam, and as a result it collided with the top of the tower, destroying its upper floors and killing the JSDF soldiers stationed there.


↑ back to top ・ contents
Retrieved from "http://wikizilla.org/w/index.php?title=Yokohama_Landmark_Tower&oldid=158638"
Categories: