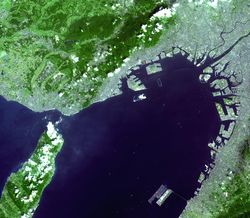 Osaka Bay  (大阪湾,   Ōsaka-wan) is a bay located offshore from the city of Osaka, which is separated from the Pacific Ocean by the Kii Channel. It appears in multiple kaiju films. 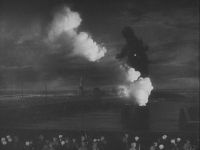 When Godzilla arrived in Osaka Bay, the city enforced a mandatory blackout and the JSDF began to lead him away from the shore using flares dropped from Lockheed T-33A Shooting Star planes. However, after a fire erupted at a refinery in the city, both Godzilla and Anguirus were drawn back to the shore and emerged from the bay before resuming their battle.


↑ back to top ・ contents
Retrieved from "https://wikizilla.org/w/index.php?title=Osaka_Bay&oldid=174364"
Categories: