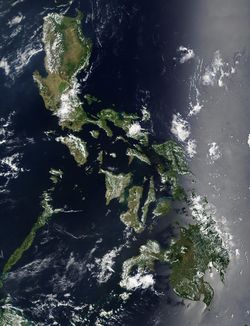 The Republic of the Philippines is an island nation in southeast Asia, whose capital city is Manila. It is referenced and featured in multiple kaiju films.

Rodan was sighted flying over Manila, after sinking a cargo vessel somewhere in the island of Mindanao.

Manila, the capital city of the Philippines, in Godzilla vs. Mothra

After witnessing the battle between Mothra, Battra, and Godzilla in the Pacific Ocean, Takuya Fujito and his ex-wife Masako Tezuka stayed in a hotel in Manila. While they were staying there, the Cosmos disappeared from their hotel room, as they had been stolen by Kenji Ando and given to the Marutomo Company.

As the ship Kairyu-Maru sailed near the coast of the Philippines carrying its payload of plutonium, it suddenly ran aground on a moving atoll. The ship was not badly damaged, and none of the cargo was leaked, but the crew was bewildered at the sight of the floating atoll. When the ship returned to Japan, an investigative party was immediately formed to study the strange phenomenon.

The decaying corpse of a Gyaos is found in the Philippines in Gamera 3: Revenge of Iris

Mayumi Nagamine was called to a village in the Philippines to investigate reports that a Gyaos had appeared there. When Nagamine arrived, she found the Gyaos' rotting corpse in the village, where it had eaten a man and a young boy. While Nagamine observed the carcass, an old woman ran out of a hut and began screaming hysterically and hitting the carcass with a shovel. Nagamine asked about the woman, to which her interpreter replied that the creature's victims had been the woman's son and grandson.

Manila, the capital city of the Philippines, in Pacific Rim

Hundun, the second Kaiju to emerge from the Breach, attacked Manila on February 5, 2014.[1]

The collapsed strip mine in the Philippines in Godzilla (2014)

In 1999, Monarch scientists Ishiro Serizawa and Vivienne Graham were summoned to the Philippines to investigate the discovery of a colossal skeleton under a strip mine. There, Serizawa identified the skeleton as belonging to a member of the same species as the creature known as Godzilla, the monster Monarch had been formed to study. Serizawa and Graham also discovered two parasitic spores attached to the skeleton, both of which appeared to be perfectly preserved rather than fossilized. However, one of the spores had burst open, and a large trail was left behind by whatever hatched from it, leading out to the ocean.

This is a list of references for Philippines. These citations are used to identify the reliable sources on which this article is based. These references appear inside articles in the form of superscript numbers, which look like this: [1]

32 months ago
Score 0
Why the Pacific Rim section is located in the Philippines page and not in the Manila page? The only city that appears and mentioned in the movie is Manila, not the country itself.
Permalink
↑ back to top ・ contents
Retrieved from "https://wikizilla.org/w/index.php?title=Philippines&oldid=180990"
Categories: