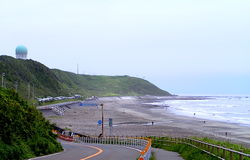 Omaezaki is a city on the eastern edge of Shizuoka Prefecture, located on the Omaezaki Peninsula which forms the southwestern boundary of Suruga Bay. The city makes a brief appearance in the 1995 Godzilla film, Godzilla vs. Destoroyah.

Godzilla Junior surfaces near the beach at Omaezaki in Godzilla vs. Destoroyah

Following the destruction of Birth Island, LittleGodzilla, now grown into a sub-adult Godzilla dubbed "Godzilla Junior," suddenly surfaced just off the coast of Omaezaki en-route to his home on Adonoa Island, terrifying the beach-goers there. Miki Saegusa landed her helicopter on the beach to observe him. Junior watched the humans running away, and then continued on his journey north.


↑ back to top ・ contents
Retrieved from "http://wikizilla.org/w/index.php?title=Omaezaki&oldid=176034"
Categories: