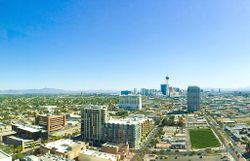 Nevada is the 36th state in the United States of America. It is notably home to the city of Las Vegas and its popular casinos and resort hotels that make up the Las Vegas Strip and the Yucca Mountain Nuclear Waste Repository, both of which received relevance in Legendary Pictures' MonsterVerse.

During a mining operation in the Philippines in 1999, two MUTO spores were discovered attached to a massive skeletal structure in a cave. While the first spore - the male, had already hatched and has been burrowing its way towards the Janjira Nuclear Power Plant in Japan, the other spore - the female, did not. Instead, the Americans took possession of said spore so they could vivisect and perform several tests on it. After performing every test they could think of, the Americans disposed of it in the Yucca Mountain Nuclear Waste Repository, believing it to have been dormant.

The female MUTO would remain dormant for the next fifteen years. However, in 2014, the male MUTO sent out a mating call to the female MUTO, signaling to her that it had matured and was now ready to mate, awakening her from her dormancy. Realizing the call was for the female and that Godzilla intercepted it and was now pursuing the male, Dr. Ishiro Serizawa and his assistant Vivienne Graham explained the existence of the female spore found in the mine to Admiral William Stenz and Captain Russell Hampton, worrying that the female was not actually dormant as they thought it was. Once Serizawa told Stenz and Hampton it was located at the Yucca Mountain Repository, the United States military sent personnel to the repository to investigate it.

The destroyed Las Vegas Strip caused by the female MUTO

By the time the military reached the repository, the facility was already destroyed. The female MUTO had awoken and broke out of containment in order to reunite with her counterpart in San Francisco, now making her way towards the Las Vegas Strip, terrorizing the populace and leaving untold amounts of destruction in her wake. After passing through the now-destroyed strip, the military fired missiles at the female, hoping to at the very least, slow it down.

The ruins of the Las Vegas strip in Godzilla: King of the Monsters

Five years after the female MUTO destroyed the Las Vegas Strip, it was left in its damaged state, and at some point completely abandoned. As noted by Dr. Emma Russell in 2019, the unique radiation emitted by the female MUTO (and by extension, all the Titans) caused the area to be completely overgrown with vegetation, transforming the normally-arid city into a desert oasis.


↑ back to top ・ contents
Retrieved from "https://wikizilla.org/w/index.php?title=Nevada&oldid=151938"
Categories: