The Mechani-Kong kaiju profile is the 21st episode of Wikizilla's Kaiju Profiles video series. It was uploaded on January 12, 2018. 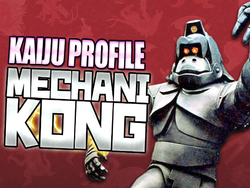 Hey kaiju fans, this is The Boy Who Cried Godzilla, and today we’re setting our sights on the King of the Apes’ robotic double: Mechani-Kong!

Mechani-Kong is a robotic King Kong doppelganger that debuted as an antagonist in the 1966 Rankin-Bass television series “The King Kong Show,” and was later re-imagined in Toho’s 1967 film “King Kong Escapes." While it was proposed to appear in a handful of unmade Toho projects in the early 90's, and made multiple minor appearances in games and manga near that time, the mechanical ape hasn't been featured in much media in recent years.

In "The King Kong Show," Mechani-Kong is a giant robot bearing the basic silhouette of King Kong himself. His body made of sleek brown metal, with his face, hands, and chest being a lighter tan color. He has a window on the top of his head, behind which Dr. Who controls the mechanism.

Toho’s Mechani-Kong is entirely silver with clear rivets on its body. Its face is an expressionless adaptation of King Kong’s face. Mechani-Kong Number 1 has a belt of canister-like grenades around its waist, though the second iteration lacks it.

The King Kong Show: Seeking revenge for a previous defeat, Doctor Who began to destroy New Guinea with Mechani-Kong. The Military mistook it for the real Kong, and went to arrest him on Mondo Island. While discussing the incident with Professor Bond, who looked after Kong with his children, the Military received word of another attack on New Guinea, and the Bonds brought Kong to the island nation to help look into the matter. Kong then attempted to attack Mechani-Kong, but Mechani-Kong was unfazed by all of his blows. After Mechani-Kong knocked Kong to the ground, Kong headbutted Mechani-Kong into the ocean, causing him to break down. Dr. Who then had his robot airlifted away with helicopters.

King Kong Escapes: After defecting from the United Nations, Dr. Who stole designs from his former colleague Carl Nelson, and used them to create Mechani-Kong to mine for the highly radioactive Element X at the North Pole. After digging too close to the element, the radiation caused Mechani-Kong to break down, and make Who seek the real Kong to replace it. After Kong escaped Who’s control, he rebuilt Mechani-Kong as Mechani-Kong Number 2 and sent it to retrieve Kong. After approaching the ape, the robot used its hypnotic diode to immobilize him, but Kong quickly snapped out of it thanks to U.N. Lieutenant Jiro Nomura shooting the light and breaking it. Mechani-Kong then grabbed Nomura’s comrade Lieutenant Susan Watson, and took her up Tokyo Tower where he threatened to drop her if Kong did not comply. Not understanding the warning, Kong climbed up after her and Mechani-Kong dropped her, though Kong saved her. As the Kongs continued climbing, the tower began to sway under their combined weights, and a defector aboard Who’s ship, Madame Piranha, broke Mechani-Kong’s control terminal. This caused the robot to short circuit and break apart upon hitting the ground. 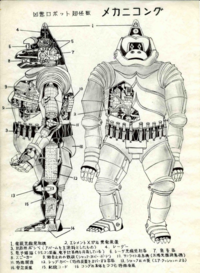 Physical Strength: Mechani-Kong has strength on par with the organic Kong, but not restricted by endurance.

Hypnotic Diode: Mechani-Kong Number 2 is outfitted with a light in its head that is capable of putting those who look at it into a state of hypnosis.

Gas Cylinders: Mechani-Kong Number 1 has a utility belt attached to its waist that contains twenty giant compressed gas cylinders, composed primarily of napalm. It can pull these ‘grenades’ off his belt and throw them, either to try and harm his enemies or to dig through the arctic ice.

Loudspeakers: Dr. Who can transmit his voice through loudspeakers located within Mechani-Kong’s mouth, with the sound carrying for 10 square kilometers.

Miscellaneous: Other weapons and components said to be part of the robot's arsenal include: an Element X furnace, a Generator, an Electronic brain (with a remote control device and computer built-in), a wide-angle radar, and a wide parabolic reflector, among the previously mentioned weapons.

The robot is additionally featured in the 1988 Konami video game, "Konami Wai Wai World," a Metroidvania-type game notable for crossing over a number of characters and stages from various Konami-produced games, including King Kong from "King Kong 2: Furious Megaton Punch." Mechani-Kong appears in the fifth stage, called 'City Stage,' as one of the naturally-occurring enemies. Later in the level another mechanical ape appears named Bosskonger, who serves as the stage's boss.

Mechani-Kong was a personal favorite kaiju of Koichi Kawakita, special effects director for most of the Heisei Godzilla films. Kawakita planned to pit Mechani-Kong against Godzilla in several unmade projects in the early 1990's, including "Micro Super Battle: Godzilla vs. Gigamoth," "Godzilla's Counterattack," and "Godzilla vs. Mechani-Kong." Ultimately, Toho found that it would be difficult to use even the likeness of King Kong in one of their own films, and so these various projects were replaced by the film "Godzilla vs. Mothra." However, Kawakita later paid tribute to Mechani-Kong with the monster Bulgario in the show "Phantom Star God Justirisers" and the film "Super Star Fleet Sazer-X the Movie: Fight! Star Soldiers," which he claimed was based on the unused Heisei design for Mechani-Kong.

Also, Mechani-Kong makes a brief cameo alongside Maguma in a drawing in an episode of the 1993 trivia show, "Adventure! Godzilland 2."

And that’s Wikizilla’s Kaiju Profile on Mechani-Kong. Thanks for watching, and I'll see ya next time!