The Godzilla Filius and Godzilla Earth kaiju profile is the 22nd episode of Wikizilla's Kaiju Profiles video series. It was uploaded on February 10, 2017. 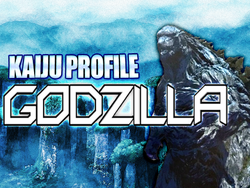 Godzilla Filius and Godzilla Earth are the first incarnations of the Monster King to appear in an animated film, with Earth also being the largest on-screen incarnation of the character to date. This Godzilla first appeared in the year 2030, at which point mankind had already endured over a quarter of a century of repeated attacks from giant monsters. Godzilla established himself as the most powerful monster, eliminating many of the others and resisting all of mankind's attempts to defeat him, even with the assistance of humanity's alien allies.

This Godzilla is described as taking the basic, recognizable silhouette of Godzilla and combining it with the unique traits decided for the character for the anime works. Rather than aiming for something anatomically accurate, this Godzilla is simply meant to be imposing.

The anime Godzilla superficially resembles the MonsterVerse Godzilla, with a bulky body and a thick and short neck, but contrasts with his crocodile-like head bearing a relatively long snout, large arms and thighs with skinnier lower legs, and sharp and jagged leaf-shaped dorsal plates. Godzilla has rough, bluish green skin with a texture reminiscent of tree bark across his body. Inspired by Kongōrikishi statues, he has a very robust musculature, with pronounced abdominal and pectoral muscles on his chest. The muscular element to Godzilla's appearance is meant to express its power as well as invoke the hugeness of trees, its status as the apex life form on Earth, and a deity-like presence. His tail has a ridged underside, and ends with a pointed spear-like tip. According to the "Planet of the Monsters" theater program, the monster's deity-like blue eyes are meant to convey intelligence, "such as that of a philosopher."

While Godzilla Earth looks more or less like a larger version of Godzilla Filius after 20,000 years, he also possesses several spikes on the bottom of his chin that resemble a beard.

This incarnation of Godzilla is unique in that he originated from plant rather than animal life. He is said to be the "end result of natural selection on Earth" and has survived for 20,000 years as the largest and most powerful lifeform in the planet's history. Godzilla evolved as a result of plant life incorporating the characteristics of various other organisms through horizontal gene transfer. Godzilla was first discovered in 2030 by Kyohei Yamane when he traveled to Odo Island to investigate the carcass of a Kamoebas that washed ashore. Yamane named the possible predator responsible "Godzilla," after a mythical dragon from the island's folklore.

The prequel novel to the anime trilogy, "GODZILLA: Monster Apocalypse," goes much more into detail about both Godzilla's role and the anime movie universe in general. You can learn more about it by watching this video.

When the Aratrum used its hyperdrives to return to Earth, its crew found that nearly 20,000 years had passed, and that Godzilla was still alive on the planet's surface. Haruo Sakaki proposed a plan to disable Godzilla's asymmetrically permeable shield and inject an EMP Probe inside of him, which he believed would cause Godzilla's body to become overloaded with electromagnetic energy and make him explode. Haruo accompanied a team to the former Tanzawa Forest area of Japan to carry out his plan, but they were attacked by small flying creatures spawned from Godzilla's cells called Servum, which destroyed several Landing Ships.

Lieutenant Eliott Leland gave the order to evacuate the surviving forces through the Tanzawa Pass and meet with another unit to refuel and repair the surviving Landing Ships and return to the Aratrum. However, as the unit moved toward its destination, Godzilla appeared and attacked them. Metphies allowed Haruo to board a Hover Bike and attack Godzilla so he could determine the location of his electromagnetic organ. However, the Hover Bike's guns were too weak to make Godzilla deploy his shield. Knowing this, Leland took command of a Multipodal Battery and fired at Godzilla, who retaliated by destroying the vehicle with his atomic breath. However, Leland's sacrifice was not in vain, as the attack made Godzilla deploy his Asymmetrically Permeable Shield, which had now been traced to his dorsal plates.

With Leland dead, command of the operation fell to Metphies, who designated all of his authority to Haruo. Haruo explained the operation to all surviving forces, and convinced them to undertake the plan. A Hover Bike fleet attacked Godzilla in an attempt to draw him to the Tanzawa Pass, where Haruo and the remaining forces were waiting with Multipodal Batteries and Powered Suits. Godzilla destroyed several of the Hover Bikes with his atomic breath, but the fleet was able to draw him into the pass. Once he reached the target area, explosive charges were detonated and the slopes collapsed onto the monster, trapping him. The Multipodal Batteries all opened fire on him. As predicted, Godzilla deployed his shield, which protected him from the artillery strikes. Having isolated the sound produced by Godzilla's EMP organ, the forces were able to cross-reference it with the sounds currently being produced and determine exactly when the shield would collapse and redeploy. Knowing Godzilla's healing factor would allow him to heal any damage extremely quickly, Haruo entered a Powered Suit and jumped onto Godzilla's back as the shield collapsed. He told the Batteries to open fire on Godzilla's back, damaging the monster's dorsal plates and destroying his electromagnetic organ. Haruo and numerous others then used Powered Suits to plant EMP Probes into the monster. As Godzilla's tissue healed, the Powered Suits were all forced off of his back. The monster turned his head and prepared to fire his atomic breath at Haruo, but the EMP Probes were effective and Godzilla immediately exploded.

The plan had succeeded in destroying the monster. However, analysis of the carcass revealed that the creature was completely identical to the Godzilla that appeared in 2030, which was impossible given the time that had passed and Godzilla's capacity for evolution. Martin Lazzari believed that this was some kind of offspring formed by Godzilla's cells, and that there could still be more Godzillas living on Earth.

Shortly after, seismic activity was detected in the area, followed by the explosion of a nearby mountain. The original Godzilla, now over 300 meters tall, emerged from the smoke and turned his attention to the nearby humans. Haruo ordered everyone to retreat quickly, but Godzilla destroyed several fleeing Landing Ships with a super oscillatory wave projected from his mouth. Haruo attempted to distract Godzilla with a Multipodal Battery while the remaining forces tried to escape, but Godzilla swung his tail through the air and produced a powerful shockwave that seemingly wiped out the humans' remaining forces, leaving Haruo trapped under wreckage and swearing that he would get his revenge...

Asymmetrically Permeable Shield: Godzilla Earth and Filius can generate a powerful electromagnetic charge through an "in-vivo amplifier" located inside their bodies. This pulse can be used to disable electronics around Godzilla, or to produce an Asymmetrically Permeable Shield, a forcefield which surrounds Godzilla and shields him from any and all damage, including strikes from multiple nuclear warheads. This ability is also possessed by the Servum, as they, and Filius, are derived from Godzilla Earth.

Atomic Breath: Godzilla and Filius can fire a highly-accelerated charged particle beam from their mouths which have seemingly pinpoint accuracy. Godzilla fires this beam from his shield, in front of his mouth.

Super Oscillatory Wave: A new ability Godzilla Earth gained as a result of growing over 20,000 years is the Super Oscillatory Wave. This attack is a resonance phenomenon caused by the King of Monsters roaring at an extremely high volume, and is capable of crushing and destroying targets.

Shockwave: Godzilla Earth can generate a powerful shockwave by swinging his tail. This beam was capable of wiping out a large portion of humanity's forces.

Metallic Tissue: Godzilla's body tissue is integrated with metallic muscle fibers that support his massive weight in the absence of a skeleton, and contribute to his impressive physical durability. Godzilla's cells possess incredible regenerative and reproductive properties, allowing them to give rise to all-new species possessing Godzilla's DNA. Repeated propagation of Godzilla's cells over a period of 20,000 years created an all new ecosystem on Earth built around Godzilla. Additionally, Godzilla's cells grant him a rapid healing factor that allows his tissue to heal completely in a manner of seconds if damaged.

Stealth: Godzilla's body is able to absorb radio waves, making him impossible to detect using radar and other targeting systems except when he is firing his atomic breath.

Weaknesses: Godzilla Filius's shield is produced by an organ located in his dorsal plates. If the organ is targeted and destroyed at a moment where the shield is not deployed, the shield will be disabled until the organ regenerates. The humans destroyed Godzilla Filius by planting EMP Probes into his body while the shield was disabled, which caused electromagnetic energy to build to critical levels inside Godzilla's body until he exploded.

Trees were decided upon as the motif for the anime Godzilla's design after the key concept for this Godzilla was determined to be that it was the "peak of the evolution of life" on Earth. According to co-director Kobun Shizuno, there were several reasons for this, including the fact that trees are currently the most widespread, largest organisms on Earth; the fact that they are capable of living for thousands of years - "basically only requiring light and water" to survive; and that trees' hard and fibrous body tissues protected them while also supporting their enormous mass and volume. Moreover, actual trees possess trace elements in their biology and generate electrons when performing photosynthesis, allowing for a plant-based Godzilla to use powerful electromagnetic waves. Shizuno explained, "We expanded from the idea of if a plant had undergone super-evolution due to its cellular structure perhaps containing metallic elements, and its whole body became a power generator as a result." "I heard that at the top of the evolution of the Earth are actually plants. And in this 'planet of the monsters,' I thought Godzilla would be like a huge 'world tree' at the center of its unique environment."

Godzilla Earth is by far the tallest Godzilla incarnation to date, standing over 318 meters tall, considerably taller than the fourth form of Shin Godzilla, who stands at 118.5 meters, and the Hanna-Barbera Godzilla, who stands at 400 feet. Godzilla Earth is also the tallest known kaiju in the franchise, surpassing the Heisei King Ghidorah and Bagan.

Godzilla Earth is also the heaviest Godzilla incarnation at 100,000 metric tons, surpassing the 92,000 metric ton weight of Shin Godzilla's fourth form. However, he is not the heaviest kaiju in the franchise, as he weighs the same as Keizer Ghidorah and Biollante's Flower Beast Form, and is lighter than the Heisei Mechagodzilla, M.O.G.U.E.R.A., Biollante's Plant Beast Form, Bagan, and the heaviest monster in the franchise, the flying form of SpaceGodzilla.

On the flip side, Godzilla Earth's initial and Filius's current 50 meter height is tied with the original and Showa Godzillas for the second shortest Godzilla, only surpassing Shin Godzilla's second form. Meanwhile, his initial weight of 10,000 metric tons makes him one of the lightest Godzilla incarnations to appear in a film and only heavier than the Hanna-Barbera Godzilla and TriStar Godzilla.

And that's all there is to know about the anime Godzilla... for now. Thanks for watching!